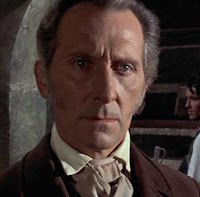 November on Horror Channel sees a premiere edition of a Hammer Double-Bill Season where eight unmissable film classics will be screened on Saturday nights from Nov 7 to Nov 28 at 9pm. Five have been directed by Terence Fisher, one of the most prominent horror directors of the 20th Century and the first to bring gothic horror alive in full colour,

In Oliver Reed’s first film role, he excels as Leon Corledo, a young man raised in the home of Don Alfredo Corledo (Clifford Evans), his kind and loving adopted father. When he leaves to find work, Leon discovers that he has increasingly violent urges each full moon. Although these tendencies are calmed by Leon's love for the beautiful Christina (Catherine Feller), he ultimately cannot contain his curse, given to his raped mother, and transforms into a werewolf, terrorising the Spanish countryside. Directed by Hammer stalwart Terence Fisher

A mysterious monster is turning people to stone in a German village in 1910. When his girlfriend is killed, Bruno (Jeremy Longhurst) becomes the prime suspect. His ensuing suicide seems to confirm his guilt, but professor Carl Maister (Christopher Lee) isn't so sure. He thinks one of the villagers is possessed by the spirit of Megaera, sister to Medusa. Among the possible culprits are Dr. Namaroff (Peter Cushing), gorgeous nurse Carla (Barbara Shelley) and a mental patient

Sat 14 Nov @ 9pm – THE REVENGE OF FRANKENSTEIN (1958) *Network Premiere
The second in the Hammer Frankenstein series and considered Terence Fisher’s best, General practitioner (Peter Cushing), now residing in the village of Carlsbruck is none other than our old friend, Victor Frankenstein. No one seems unduly concerned when the patients in a charity clinic begin losing their arms and legs during Dr. Stein's emergency operations -- no one except his young rival, Dr. Kleve (Kerwin Mathews). Full of clever (if gory) touches, Revenge of Frankenstein is among the best of Hammer Studio's late-1950s films.

Originally released in the UK as ‘House of Fright’, this is the film version of Robert Louis Stevenson's The Strange Case of Dr. Jekyll and Mr. Hyde in which Hyde is the handsome, clean-shaven one. Playboy Paul Massie plays Dr. Jekyll and Mr. Hyde. wants to exact revenge on Paul Allen (Christopher Lee), who has been siphoning off Jekyll's savings to finance his own gambling and womanising. In contrast to Stevenson's story, director Terence Fisher ensures that Jekyll/Hyde does not die--though the strain of being Hyde permanently scarred Jekyll's psyche.

Directed by Freddy Francis, this is the third in the Hammer Frankenstein series, which sees Dr. Frankenstein (Peter Cushing) return destitute to his home village to recommence his experimental research into the reanimation of dead tissue. He stumbles upon his old monster suspended in ice and although he revives the creature, Frankenstein must seek the help of hypnotist Zoltan (Peter Woodthorpe) to repair its mind. Zoltan then assumes control of the monster, using him to wreak havoc.

Director Terence Fisher followed the excellent Horror of Dracula with this richly-coloured sequel. Though imprisoned in the family estate by his mother, Baron Meinster (David Peel) is released from his silver chains by an unsuspecting French teacher (Yvonne Monlaur), through which he gains access to a number of young women at a girls' school. Fortunately, master vampire killer Dr. Van Helsing (Peter Cushing) is on the case. This is one of the first Hammer films to delve into the more sexual aspects of vampirism, with implicit suggestions of  sadomasochism and homosexuality.
Sat 28 Nov @ 9pm – NIGHT CREATURES (1962) *Network Premier

Set in the 18th-century, this engaging costume melodrama of skulduggery stars Captain Collier (Patrick Allen), who is sent, with his crew, to investigate some coastal smuggling. However, when mysterious swamp phantoms appear, Captain Collier suspects that the odd village vicar (Peter Cushing) might be hiding something, and what better way to do that than by creating fortuitous ghosts to scare them away…

This was the swan song for director Seth Holt who died shortly before filming was completed. An expedition led by Professor Fuchs (Andrew Keir) finds the cursed tomb of an evil Egyptian princess and discovers her perfectly preserved, severed hand, which sports a dazzling ruby ring. Several years later, Fuchs gives the ring to his young daughter (Valerie Leon), whereupon she slowly begins to take on the malevolent traits of its original wearer.