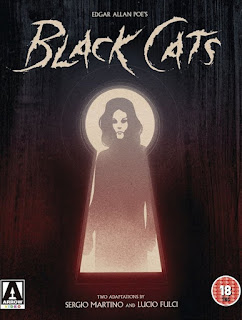 Released in time for Halloween, Arrow Video is pleased to announce the special edition box set, Edgar Allan Poe’s Black Cats: Two Adaptations by Sergio Martino & Lucio Fulci, featuring stunning new 2K transfers of two gothic, gory and totally original adaptations of Poe’s famous yarn The Black Cat from directors Sergio Martino and Lucio Fulci.
Martino’s "Your Vice is a Locked Room and Only I Have the Key" and Fulci’s "The Black Cat" will be housed together as part of this new box-set which is limited to a run of 3,000 copies in the UK and 3,000 copies in the US.
This new set will include a host of extras which are detailed below and include exclusive new interviews with Sergio Martino and actress Dagmar Lassander. This exciting new set will also include an 80-page booklet containing new articles on the films, Lucio Fulci’s last ever interview and a reprint of Poe’s original story. The set will arrive on Blu-ray and DVD on 19th October.
Synopsis
Edgar Allan Poe’s celebrated story The Black Cat has provided the inspiration for numerous films over the years. But few adaptations are as stylish as those offered up by the twin Italian titans of terror, Sergio Martino and Lucio Fulci.
In Martino’s classic giallo Your Vice is a Locked Room and Only I Have the Key, teacher Oliviero (Luigi Pistilli, A Bay of Blood) finds himself under suspicion for murder when one of his students – and mistress – is found brutally murdered. As more bodies start to pile up, the arrival of Oliviero’s attractive niece (Edwige Fenech, Five Dolls for an August Moon, All the Colours of the Dark) brings with it complications of its own.
In The Black Cat, from that “other” Godfather of Gore, Lucio Fulci (Zombie Flesh-Eaters), Scotland Yard Inspector Gorley (David Warbeck, The Beyond) find himself summoned to a sleepy English village to investigate the recent murder of a young couple. With no obvious signs of entry at the murder scene, Gorley is forced to start considering the possibility that his suspect may not be human…
Finally together on Blu-ray and in stunning new 2K restorations from the original camera negatives, fans can enjoy the double-dose of terror that is Edgar Allan Poe’s Black Cats – Italian-style!

Limited Edition boxed-set (3000 copies) containing Your Vice Is a Locked Room and Only I Have the Key and The Black Cat
Brand new 2K restorations of the films from the original camera negatives
High Definition Blu-ray (1080p) and Standard Definition DVD presentations
Original Italian and English soundtracks in mono audio (uncompressed PCM on the Blu-rays)
Newly translated English subtitles for the Italian soundtracks
Optional English subtitles for the deaf and hard of hearing for the English soundtracks
Limited Edition 80-page booklet containing new articles on the films, Lucio Fulci’s last ever interview and a reprint of Poe’s original story

YOUR VICE IS A LOCKED ROOM AND ONLY I HAVE THE KEY:

Through the Keyhole – a brand new interview with director Sergio Martino
Unveiling the Vice – making-of retrospective featuring interviews with Martino, star Edwige Fenech and screenwriter Ernesto Gastaldi
Dolls of Flesh and Blood: The Gialli of Sergio Martino – a visual essay by Michael Mackenzie exploring the director’s unique contributions to the giallo genre
The Strange Vices of Ms. Fenech – film historian Justin Harries on the Your Vice actress’ prolific career • Eli Roth on Your Vice and the genius of Martino
Reversible sleeve featuring original and newly commissioned artwork by Matthew Griffin