This week sees the release of the latest film in the Paranormal Activity franchise “Paranormal Activity: The Ghost Dimension”. The series has come a long way since the first film back in 2007, so let’s have a recap as to what went on before. 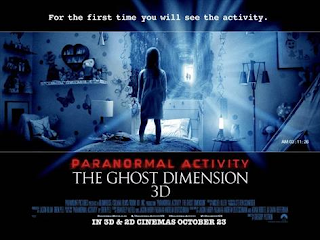 Paranormal Activity (2007)
A young couple, Katie and Micah, set up hidden cameras around their home to capture evidence of possible paranormal activity, after hearing strange noises in the night. The cameras do indeed capture strange goings on, but as the film goes on, they capture much, much more…

Paranormal Activity 2 (2010)
Set just prior to the events of part 1, Kristi, the sister of Katie from the previous film, and her partner Daniel, decide to install cameras in their home after an apparent burglary, in which the whole house was ransacked. Whilst the cameras fail to pick up further evidence of burglars, they do pick up ghostly goings on and they discover its never wise to ignore the advice of your devoutly religious housekeeper….

Paranormal Activity 3 (2011)
Another prequel, set some 18 years prior to the previous films, follows young Kristi and her sister Katie, living with their mother and step-father. Following an unfortunate incident with a babysitter and after capturing what looks like ghostly goings on in the bedroom on camera, they set up cameras around the home to see if they can capture any other ‘spooky’ occurrences. Only to find that playing a game of “bloody Mary” is never a wise idea in a horror film (didn’t these people see “Candyman”?)

Paranormal Activity 4 (2012)
A direct sequel to part 2, in which a family from Nevada encounter ghostly goings on in their home. But then when your neighbour is Katie (from part 1), what do you expect?

Paranormal Activity : The Marked Ones (2014)
Somewhat different to the other films, being a spin-off, as opposed to a direct sequel or prequel. A high school kid finds himself targeted by strange ghostly forces, after his neighbour, who he suspected was an occultist, is mysteriously murdered.
As his friends attempt to discover what’s going on, they find themselves visiting some familiar locations.
Which leads us to…

Paranormal Activity: The Ghost Dimension (2015)
It seems the box of tapes that went missing during the "burglary" in part 2 have turned up in the basement of the new house the Fleege family have just moved into. Unfortunately for them, playing them back leads to dire, dire consequences…


What happens next? Find out in "Paranormal Activity: The Ghost Dimension" in cinemas now…
View the trailer on YouTube
Posted by Dark Angel at 21:18