Saturday 17th October saw me trudging from my hotel back up to the Broadway cinema in Nottingham, for Day 3 of the Mayhem film festival.

Saturdays schedule kicked off at midday with a screening of Takashi Yamazaki’s “Parasyte : Part 1” (2014). A kind of bizarre mash-up between “Invasion of the Body Snatchers” and “The Thing”, as a bunch of alien parasites wash up on the shores of Japan and start taking over people bodies. Resulting in a series of grisly murders, as Humans are the only prey these aliens seem to enjoy eating.

But one of these parasites fails to get inside the brain of a young schoolboy, and burrows into his arm instead. So rather than being taken over, the 2 form a symbiotic relationship and the boy and his mutated, talking hand, proceed to try and stop the others from devouring humanity.

I’ve always found Japanese horror movies to be something of an acquired taste, but this live action adaptation of the popular Manga comic, quickly won me over with its strange fight scenes and slapstick humour. I’m now going to see if I can track down part 2 as I’m dying to know what happens next.

The second film “He Never Died” (2015) from director Jason Krawczyk, was in my view the stand out film of the day. Former punk rocker Henry Rollins plays a socially awkward man, who rarely speaks and spends his time either sleeping in his flat, eating at the local diner or playing bingo with the old folk at the local church.

But when his estranged daughter gets embroiled in some dodgy dealings with some low-rent mobsters, it kick starts a chain of events that makes you question just who or what he is, as events between him and the mobsters escalate and they seem unable to take him down no matter how many times they try.

The humour is as dead-pan as it can get and Rollins is just excellent as the mysterious misfit, who seems more Terminator than Human.

There then followed a series of Scary Short films, which were a pretty mixed bag and in the interests of brevity, I will be reviewing separately in another post.

After those there followed a presentation of something completely different for Mayhem, with a live stage reading of an unproduced Hammer films script “The Unquenchable Thirst of Dracula”. Which seemed an apt production, given Christopher Lee’s death earlier this year.

Narrated by Jontathon Rigby and with a full cast of voice actors, it was rather like seeing a radio play in action, complete with sound effects, as the cast narrated a tale of Dracula, who has fled to India, running amok amongst the locals.

Interestingly, of all the films being screened at the festival, the live reading seemed to have the most people in attendance. Clearly the Hammer fans were out in force that day as the cinema was packed almost to capacity and the reading was certainly well received as the cast were given a riotous round of applause at the end. 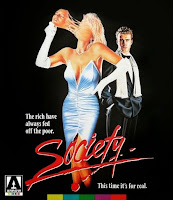 Day 3 concluded with a screening of cult classic “Society” (1989), Brian Yuzna’s bizarre tale of how a spoilt rich kid discovers his wealthy parents are, quite literally, feeding off the poor and there’s a reason he feels he seems alienated from the rest of his family.

Rather than show one of the new-remastered digital versions, Mayhem chose to screen a 35mm film print and it was quite weird being reminded of what it was like to watch films on scratchy celluloid, as opposed to the crystal clear digital prints used by cinemas today.

Then it was back to the hotel again to prepare for Day 4.

I'll be posting my thoughts on Day 4 live from the event on social media, so be sure to visit my Facebook and Twitter pages throughout Sunday the 18th from 12pm onwards.

For more info on the mayhem festival visit http://www.broadway.org.uk/mayhem