Arrow Video is thrilled to announce the release of "Hellraiser: The Scarlet Box", a limited edition run of 5,000 deluxe box-sets featuring Clive Barker’s iconic and seminal horror classic Hellraiser. Arriving in time for Halloween on 26th October 2015, this exclusive box set will include the first three films in the Hellraiser saga alongside an abundance of bonus materials and never-before-seen footage. 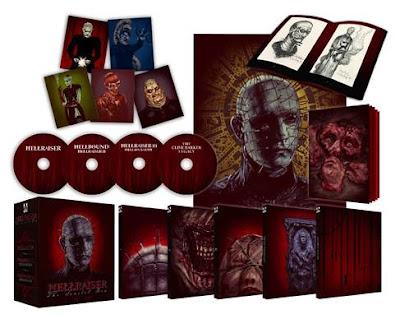 These terrifying and original films will boast brand new 2k restorations along with hours of archival content and newly produced extras including audio commentaries and interviews with Clive Barker, Doug Bradley and Sean Chapman in his first interview on the Hellraiser films in decades.
The 4-disc set will also include the newly edited version of Leviathan, the definitive documentary on Hellraiser and Hellbound: Hellraiser 2. A new documentary, Hellraiser: Evolutions, will also be included and will look at the evolution of the hit horror franchise and its enduring legacy.
These features will sit amongst a host of rarities and never-before-seen footage from the movies including the legendary ‘Surgeon’ scene from Hellbound: Hellraiser 2, the subject of fierce debate amongst fans for many years, now finally unearthed for its home video debut. 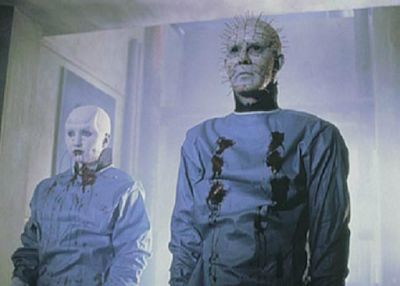 · Clive Barker short films Salomé and The Forbidden
· Books of Blood & Beyond: The Literary Works of Clive Barker – horror author David Gatward provides a tour through Barker’s written work, from the first Books of Blood to the recent The Scarlet Gospels
· Hellraiser: Evolutions – a brand new documentary looking at the evolution of the hit horror franchise and its enduring legacy, featuring interviews with Scott Derrickson (director, Hellraiser: Inferno), Rick Bota (director, Hellraiser: Hellseeker, Deader and Hellworld), Stuart Gordon (director, Re-Animator, From Beyond) and others
· The Hellraiser Chronicles: A Question of Faith – short film


200-PAGE BOOK – ‘DAMNATION GAMES’ – LIMITED EDITION EXCLUSIVE
· Exclusive 200-page hardback book with new writing on Hellraiser and the Barker universe from Barker archivists Phil and Sarah Stokes – including chapters looking at Barker’s early work, the genesis and production of the first 3 films in the Hellraiser series and much more, all illustrated with stills and rare material from the Barker archive