Mayhem Film Festival (Nottingham) are to present a live stage reading of an unfilmed Hammer script as part of their 11th edition this October. "The Unquenchable Thirst of Dracula" was written by legendary Hammer writer/producer Anthony Hinds in the late 1960s but never adapted for the screen.

Actor and film historian, Jonathan Rigby, author of the indispensable guide to British horror English Gothic: Classic Horror Cinema 1897-2015 and Christopher Lee: The Authorised Screen History, will act as the narrator and be accompanied by a group of actors to bring to life this never-seen-before Hammer Dracula story, in a unique immersive ‘screenless cinema’ experience. Lying firmly in the tradition of the classic Hammer Dracula films, The Unquenchable Thirst of Dracula, sees Count Dracula escape to India where his evil influence is just as insidious and powerful. 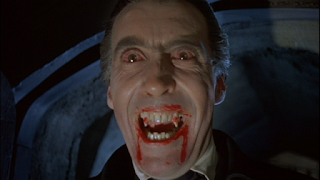 Anthony Hinds who wrote the script was the son of Hammer Films co-founder, Will Hammer, and was famous for his work on The Curse of the Werewolf (1961), The Phantom of the Opera (1962) and The Evil of Frankenstein (1964). The script would have been written for Christopher Lee at the time.

“This is a completely unique event for Mayhem, explains festival Co-Director Chris Cooke, and a great pleasure to work with horror expert and film historian Jonathan Rigby. He’s also a talented actor and will be perfect as our narrator, taking a live audience by the hand and leading them into Gothic darkness. Hammer Films have never felt more important to the history of British cinema, so this is a great opportunity for an audience to imagine a piece of classic cinema that sees Count Dracula resurrected before their eyes.”

The one-of-a-kind event is made possible thanks to Hammer Films, CATH (Cinema and Television Research Centre) and the De Montfort University. Mayhem Film Festival takes place on 15-18 October at Broadway, Nottingham with the support of the BFI Film Festival Fund, awarding funds from The National Lottery.

For more information and to book your passes please visit: http://www.broadway.org.uk/mayhem
Posted by Dark Angel at 21:15