BFI, the UK’s lead organisation for film, has launched its brand new subscription service, BFI Player+ [BFI Player Plus] - http://player.bfi.org.uk/bfi-player-plus/ (BE SURE TO CHECK OUT THE HORROR SECTION). 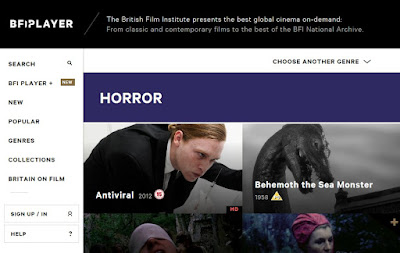 Costing just £4.99 a month, with a 30-day free trial for all users, BFI Player+ offers audiences some of the best classic and critically-acclaimed films.
Subscribers can dive into collections of hand-selected films curated by the BFI’s world-leading experts, enjoying must-see British films alongside the best of world cinema. In short: BFI Player+ is a subscription service like no other. Now, it’s easy for audiences to discover and enjoy the essential classics, all without the need for a contract.
As part of its unique approach to curated cinema, every Friday BFI Player+ will feature an exclusive weekly video recommendation from one of the UK’s most respected film critics, Mark Kermode. Each week Mark will select a key title from the BFI Player+ collections and show why it’s a film not to be missed. The series commences on Friday 30 October, with Mark’s introduction to Alfred Hitchcock’s classic The Lodger, which features a specially-created score composed by acclaimed musician, producer and composer, Nitin Sawhney in 2012.
The new BFI Player+ service will sit within the existing BFI Player – home of the go-to VoD service for new pay-per-view independent film releases and the BFI’s hugely popular Britain on Film archive collection. Britain on Film has received over 4 million views since launching in July.
BFI Player+ is available however people choose to view, be that via computer or, with the presence of the BFI Player app, across tablets and smartphones and with a fantastic roster of titles to come. A significant number of new titles – all hand-picked – will be added in coming months.
BFI Player+ is available now here: http://player.bfi.org.uk/bfi-player-plus/