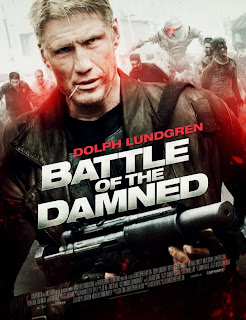 OK, following up my post last week of the films announced for this years "Day of the Undead - UK Zombie Film Festival" in Leicester, they have finally announced the last film in the line up, which will be the Dolph Lundgren film "Battle of the Damned" (2013).
All you need to know about this is it contains 3 things, Dolph Lundgren, Robots and Zombies.
Other films showing include...
The Battery (2013)
Meteletsa: Winter of the Dead (2012)
Zombie Hood (2013)
Wasteland (2013)
Stalled (2013)
Other activites include...
• The chance to vote in The Ultimate Zombie Short Film Competition
• Guest stars including David Moody, Adam Millard and Sean Page
• The Arcade of the Dead – Retro Zombie Games to die for
• Best dressed Zombie Award – Come Dressed to Impress
• Zombie Killing Challenge – Kill the Undead on a Cinema Screen
• Make Up Artists – Make you look like your favourite cadaver
• Zombie Authors – Signing books and talking about zombies
• Goodie Bags – 1st 250 people through the door get lucky !!!
• Horror Traders – Get your late Halloween or Early Xmas presents
• Spot Prizes, giveaways, themed food & drink
• All of this for ONLY £25 for a full day pass...

All day passes can be purchased from the Pheonix cinema website.

Tickets for individual films can be purchased, subject to availability, from the box office on the day.