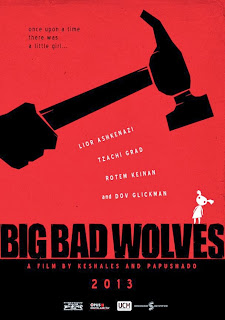 Aharon Keshales and Navot Papushado's black comedy, horror thriller "Big Bad Wolves" will be getting it's UK premiere at the UK Jewish Film Festival in November.
Lior Ashkenzi stars as a rough-edged but likeable cop charged with securing evidence against a serial killer. When his over zealous cop team is suspended for beating up the suspect, a religious studies teacher, the father of the murdered girl decides to take matters into his own hands.

Directors Keshado and Papushado play masterfully with our expectations as the father unleashes his own gruesome and terrifying plan blurring the line between who is victim and who is persecutor.

A gripping horror flick, with brilliant cinematography and an outstanding score, which manages the unusual trick of being both funny and unbearably gruesome at the same time. With disturbing scenes of violence from the outset the audience is left guessing until the last second.
The film is being shown as part of the UK Jewish film festival at 9pm, November 14 at The Odeon Swiss Cottage, 96 Finchley Road, London NW3 5EL. For more info CLICK HERE.