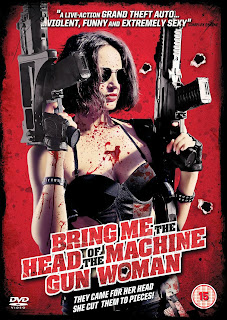 Get ready for a real blast in this violent slice of neo LatinXploitation as Chile's pioneer of action cinema, Ernesto Diaz Espinoza's, new deadly and just damn good fun Grindhouse flick Bring Me the Head of the Machine Gun comes to UK DVD and Blu-Ray this month.
After accidentally overhearing one of the city’s most dangerous criminals putting a hit on a hell-on-heels femme-fatale bounty hunter named ‘The Machine Gun Woman’ (Fernanda Urrejola), nightclub DJ and videogame addict, Santiago, avoids execution only by offering to bring her in.
When he is given 24 hours to make good on his claim, Santiago’s life turns into a violent video game of it’s own complete with missions, guns, sexy women and brutal violence.
Written and directed by Ernesto Díaz Espinoza, the film is inspired by the exploitation films of the 60s, 70s and 80s, and by Sam Packinpah´s “Bring me the Head of Alfredo García”, mixed with an explicit influence of the video game “Grand Theft Auto”. All this blends under the context of a Chilean and Latin feel.
The film is released to UK DVD and BD Monday, October 14th.
View the trailer on YouTube.