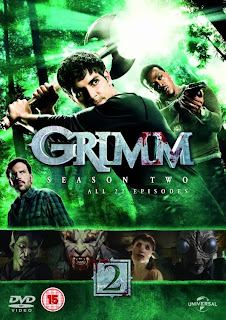 Re-discover an entirely secret world exposed by a dark family legacy, as the delicate balance between mankind and monsters continues to waiver, in GRIMM: SERIES TWO released on UK Blu-ray and DVD October 21st.

Watch’s popular fantasy drama returns with another action-packed new series, from the Producers of Buffy the Vampire Slayer and Angel and the Writer of the National Treasure trilogy.

The Primetime Emmy-Nominated series is back, boasting spectacular performances from its experienced cast, with David Giuntoli (Love Bites,Cold Case) as protagonist and Grimm descendent Nick Burkhardt; Russell Hornsby (Suits, Shameless) as his partner Hank Griffin; Silas Weir Mitchel (The Mentalist) as reformed ‘blutbad’ Monroe; Bitsie Tulloch (House MD) as Nick’s girlfriend Juliette Silverton; Sasha Roiz (Warehouse 13) as the shadowy Captain Sean Renard; Reggie Lee (Dark Knight Rises) as Sergeant Wu and new series regular Bree Turner (The Mentalist) as Rosalee Calvert.
The supernatural and mythological under-world rips away at the fabric of reality in this fantasy crime drama, as one Portland homicide detective must fight the killers that only he can see. Plagued by his supernatural lineage, Nick (Giuntoli) must battle the fantastical creatures of German story-telling (‘Wesen’) that wear a human face, whilst fighting to keep his secret from the people he loves the most. This season, as our hero finally comes to terms with his power and identity, he must tackle yet more gruesome and bizarre crimes committed by universally renowned and dangerously misunderstood creatures of ancient lore. Follow your favourite enigmatic characters on a journey through super-human amnesia, fatal potions, deadly plagues, child abductions and even UFOs!
The battle continues as GRIMM: SERIES TWO arrives on Blu-Ray and DVD on the 21st October 2013 from Universal Pictures (UK).