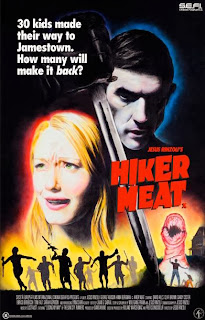 While Hiker Meat is fated to remain unrealised as a complete feature, key scenes were filmed in the Lake District in June and feature in Rough Cut. These are contrasted with on-set footage and details of the development of Hiker Meat’s soundtrack, storyboards, design and models, to form a lovingly crafted feature-length work that remains true to the tradition of classic 70s horror.
Shovlin elaborates on what he calls his ‘meta-mentary’, saying, “We’ve adopted the exploitation genre’s collaborative approach to make our own feature, with the knowledge that we can't possibly re-make a film like Hiker Meat - and don’t actually want to. Instead we’ve investigated where else we can go with it, and stripped back the making, unmaking and remaking of both the film and the idea, as a kind of ode to the power of imagination.”
Produced and distributed by Cornerhouse Artist Film. There will be a special premiere on 29 November at Cornerhouse, Manchester. Followed by its UK release Dec 6.
You can view the trailer for Hiker Meat, the film it's documenting here on YouTube.