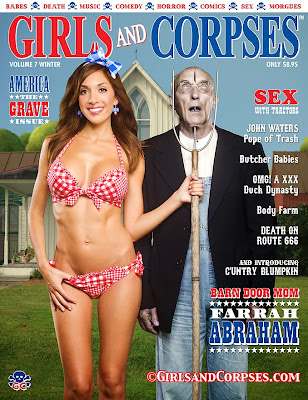 FORMER TEEN MOM STAR FARRAH ABRAHAM swings from the back door to the barn door, embracing America and a rotting FARMER GONE in GIRLS and CORPSES MAGAZINE on pre-sale now: http://girlsandcorpses.com/store/index.html

Iowa farmgirl FARRAH ABRAHAM is featured on an 'America The Grave' cover of Girls and Corpses Magazine, that will have Uncle Sam saluting. ABRAHAM provocatively poses in a red gingham bikini in an American Gothic cover spoof, with her pitchforked pal FARMER GONE.  Inside the magazine is Farrah's nine page sexy spread and a centerfold.