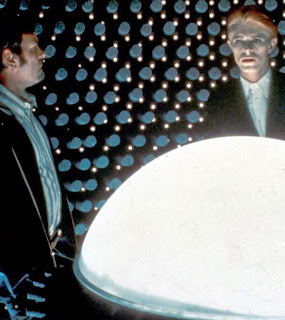 November on Horror Channel sees network premieres for a memorable collection of strange cult oddities and forgotten British horror classics, kicking off with the network premiere of Nicolas Roeg’s THE MAN WHO FELL TO EARTH, starring David Bowie. Joining Bowie in the realm of the weird and wonderful is Roy Boulting’s psychological ground-breaker TWISTED NERVE, Michael Powell’s controversial PEEPING TOM, Robert Fuest’s Hitchcockian AND SOON THE DARKNESS and Jimmy Sangster’s Hammer classic FEAR IN THE NIGHT.

Line up:
Fri 1 Nov @ 22:55 – THE MAN WHO FELL TO EARTH (1976)
Based on the 1963 novel of the same name by Walter Tevis, this cult classic stars David Bowies (in his debut film role), as an extraterrestrial who crash lands on Earth seeking a way to ship water to his planet, which is suffering from a severe drought. It also stars Candy Clark, and Hollywood veteran Rip Torn and is produced by Michael Deeley and Barry Spikings, who reunited for work on another epic, The Deer Hunter.
Fri 7 Nov @ 22:55 – AND SOON THE DARKNESS (1970)
Starring Pamela Franklin and Michele Dotrice this on the edge of your seat thriller, tells the story of two young English women on a cycling holiday in the French countryside. Cathy, distracted by a local man, parts company with Jane. When her friend fails to rejoin her, Jane returns to the last place she saw her. Cathy has vanished. Alone and with a limited knowledge of French, Jane frantically searches for her missing friend.
Fri 15 Nov @ 22: 55 – TWISTED NERVE (1968)
Director Roy Boulting brings out the best in actor Hywel Bennett, who plays Martin, a disturbed young man with a dysfunctional mother and a cold-hearted step-father. Martin, pretends, under the name of Georgie, to be mentally retarded to be near Susan (played by Hayley Mills), a girl he has become infatuated with, killing those who get in his way. But when Susan rejects him, she becomes the next target.
Fri 22 Nov @ 22:55 – PEEPING TOM (1960)
Peeping Tom stars Carl Boehm as Mark Lewis a part-time photographer who is a serial killer, murdering women while using a portable movie camera to record their dying expressions of terror. The film's controversial subject and the harsh reception by critics effectively destroyed Michael Powell's career as a director in the UK. However, it attracts a cult following and is now considered a masterpiece.
Fri 29 Nov @ 22:55 – FEAR IN THE NIGHT (1972)
This psychological horror thriller follows a young woman (Judy Geeson), recovering from a nervous breakdown, who takes up a new position working in a boys' boarding school. She soon begins to believe she is losing her mind when she starts being terrorised by a one-armed man. Directed by Jimmy Sangster and produced by Hammer Film Productions, it also stars Joan Collins, Ralph Bates and Peter Cushing.
Wed 6 Nov @ 22:55 – RITES OF SPRING (2011) *UK TV premiere
After kidnapping the nine-year-old daughter of a wealthy socialite and hiding out in an abandoned school, a group of kidnappers falls prey to a recurring terror, a bloodlust that comes every first day of spring. Part kidnap heist, part slasher movie, this is director Padraig Reynolds’s feature film debut, which scored highly on the festival circuit. It stars AJ Bowen, Anessa Ramsey, Sonny Marinelli and Katherine Randolf.
Wed 20 Nov @ 22:55 – BAD MEAT (2011) **UK TV premiere**
In Canadian director Lulu Jarmen’s splatter sensation, a boot camp for troubled teens becomes a nightmarish charnel house when spoiled meat transforms the staff from sadistic fascists into something much, worse. Get ready for spilt blood, vomit, faeces and bile – in the strangest, weirdest destined-for-cult-dom in ages. Stars Elizabeth Harnois, Dave Franco, Mark Pellegrino, & Jessica Parker Kennedy
Sat 23 Nov @ 22:55 – BEFORE DAWN (2012) * UK TV premiere
Dominic Brunt, better known as veterinarian Paddy Kirk in ‘Emmerdale’, has written and directed a terrific zom-rom horror. Alex (Dominic Brunt) and Meg (Joanne Mitchell) go for a weekend in the Yorkshire countryside in an effort to save their relationship. Unfortunately the picturesque holiday area chosen comes under attack from the walking dead and Meg is soon going to find out the depth of Alex’s love.
Plus there are network premiers for Brian Yuzna’s RETURN OF THE LIVING DEAD 3 (1993), Sat 2 Nov, 22:40; David Lynch’s MULHOLLAND DRIVE (2001), Sat 9 Nov, 22:55; Jonathan Levine’s ALL THE BOYS LOVE MANDY LANE (2006), Sat 16 Nov, 22:55 and Greg McClean’s WOLF CREEK (2005), Sat 30 Nov, 22:50.