The People Under the Stairs comes to UK BD 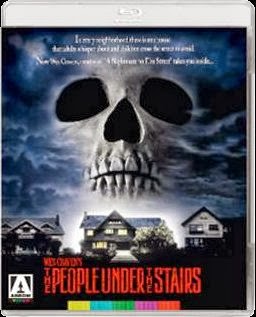 Arrow Video is thrilled to announce the UK Blu-ray release of Wes Craven’s "The People Under the Stairs". This Blu-ray disc will be available to own in the UK on 4th November and include packaging which will showcase the original poster artwork as well as a reversible sleeve with newly illustrated artwork.

In every neighbourhood there is one house that adults whisper about and children cross the street to avoid… Wes Craven, the master of terror who brought you the infamous "The Last House on the Left", invites you inside another house of horror!

“Fool” may be a streetwise kid, but he makes a decidedly bad decision when he agrees to assist a family friend in the robbery of their landlord’s imposing homestead. What begins as a routine break-in soon begins to take a sinister turn as the would-be robbers find themselves trapped inside and face-to-face with the terrible secrets which lurk within the building’s walls – and under the stairs…

"The People Under the Stairs" sees director Wes Craven return to one of his trademark themes: the savagery which lurks just underneath the skin of the outwardly conventional family unit. Often overlooked in favour of the director’s more A-list hits such as "Scream" and "A Nightmare on Elm Street", "The People Under the Stairs" is a superior slice of home-bound horror which can stand proudly alongside Craven’s best works.
Special Features: