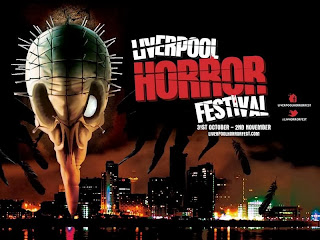 Hellraiser, Candyman and Nightbreed author Clive Barker has shown his support for the festival after making contact with the organisers this week after spotting one of posters on-line. Barker has been the inspiration behind the festival and for the artwork. The festival artwork and festival mascot designed by Liverpool based illustrator and Horrortalk's, Ilan Sheady, is a Pinhead Liver bird modelled on Barker's famous Pinhead character from Hellraiser.
Liverpool born writer Clive Barker, who lives in Beverly Hills, California said:  "I have seen thousands of graphic representations of the Hellraiser demons over the years. This is one of the very best. What a witty, elegant stylisation of Pinhead and the gang. My heart-felt thanks."

Shaune Harrison, one of the most highly respected and sought after make-up effects artists in the film industry, currently working on Game of Thrones, will be hosting a workshop at Eric's, Mathew Street on Saturday 1 November at 1pm -3pm. A Q&A with Shaune Harrison will be hosted by Jonathan Glendening, director of Strippers vs Werewolves
Shaune began his career on Clive Barker’s Nightbreed in 1988 which laid the foundation for a body of work spanning over two decades on some of the world’s highest grossing blockbusters.
The former South Wirral High pupil is a key contributor to some of movie history’s most memorable characters, he has worked on Harry Potter’s Lord Voldemort and Mad Eye Moody Hugo Weaving’s Red Skull from Captain America: The First Avenger as well as numerous characters for Star Wars. More recently Shaune supervised the practical creature effects on comedy horror Grabbers and worked on the Brad Pitt blockbuster World War Z and the upcoming new Dracula.

On Thursday 31 October at Rubber Soul on Mathew Street,  British zom-com Stalled, hailed as the new Shaun of the Dead, is being screened with cast and crew, with a flash zombie make over booth with Liverpool artist Chris Zombieking, exploding cocktails and severed hands. Film DVD extra's will be filmed on the night. Q&A hosted by Jonathan Glendening, director of Strippers vs Werewolves.