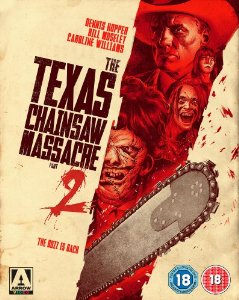 Tobe Hoopers much maligned sequel “The Texas Chainsaw Massacre 2” is getting the special edition treatment for its forthcoming UK Blu-Ray release this October from Arrow films.
Some 12 years after the original film, we discover that the authorities found no trace of the farmhouse that Sally Hardesty escaped from at the end of the original (not sure if that’s because they were incompetent, or because according to the 2012 sequel, it was burned down by a lynch mob, but anyways).
It seems that the chainsaw wielding family have since moved to and set up business as a mobile catering company (no prizes for guessing what meat they use to make their chilli with). However, when Leatherface massacres a group of annoying yuppies in their sports car, who happened to be phoning in a request to the local radio station at the time, their deaths inadvertently go out live on air.
This brings them to the attention of gruff Texas Ranger, Lt Enright (played by character actor Dennis Hopper), a relative of Sally Hardesty’s, who has been tracking them down all these years. Aided by the local radio DJ, Stretch (played by horror B-movie actress Caroline Williams), who was the one that broadcast the phone call of the 2 lads getting killed, they track them down to a deserted theme park, where the ultimate chainsaw duel to death takes place….
“Texas Chainsaw Massacre 2” is one of those films that falls into either the “love it” or “hate it” category. The problem seems to stem from the fact that Tobe Hooper made this is as a campy comedy, which put it at odds with the first. The other problem being the character of ‘Chop Top’ (Bill Mosely), one of Leatherface’s younger brothers, who comes across as either extremely annoying, or hilariously funny, depending on your point of view.
Personally speaking, I remember being very disappointed when I was finally able to view this (being unavailable in the until 2001). Though perhaps the problem might have been with the preconceptions I had about the film. Being made by the original director Tobe Hooper, with special effects by horror legend Tom Savini and starring iconic actor Dennis Hopper, I thought it would be a high-octane 80s slasher fare, so when I was confronted with a campy black comedy, with the entire cast acting like a bunch of idiots, I was instantly put off.
Made back in 1986, the films UK release was shelved after the chief film censor, James Ferman, who had infamously banned the first movie years previous, told the distributors not to bother submitting it for classification as he would cut over 20 minutes out of it, if he passed it at all. Fortunately, Ferman’s reign at the BBFC is just a distant memory these days, and we can now freely view all manner of filth and depravity at our local cinemas and in the privacy of our own homes. Including all the once banned “Texas Chainsaw Massacre” films.
This release by Arrow marks the first time the film has been available on Blu-Ray in the and comes packed full of special features.


Disc 1 contains the film, which is a brand new hi-definition transfer.
Also on the disc you get…
2x audio commentary tracks that accompany the main feature, one with director Tobe Hooper, the other with stars Caroline Willams and Bill Moseley and effects artist Tom Savini.
“It runs in the Family” feature, a 7 part 90minute retrospective making-of feature, containing Interviews with screenwriter Kit Carson, stars Bill Johnson (Leatherface) Caroline Williams (Stretch), Bill Moseley (Chop Top) and effects artist Tom Savini.
“Still Feeling the Buzz” feature,  a 30min retrospective look at the film with horror journalist and author Stephen Thrower.
Also included is an alternate opening credits scene and a selection of deleted scenes, showing Leatherface and the family heading off in their catering van and massacring a group of rioting football fans. All of which appear to be taken from a VHS source (same as whats on the US
You also get the original theatrical trailer and lastly an Image gallery of never before seen behind the scenes stills.
On disc 2, we have a couple of Tobe Hoopers earlier films.
First up is “The Heisters” which is a 10 minute short gothic fantasy film and “Eggshells”, which was Hoopers first feature film and is a very weird movie full of hippes.
Extras on the disc include an audio commentary track, which accompanies the “Eggshells” feature. There’s also an interview feature “In Conversation with Tobe Hooper”, in which the director discusses his career and lastly a trailer reel of all Tobe Hoopers  main films, including “Texas Chainsaw Massacre”, “Eaten Alive” (Death Trap), “Lifeforce” and “Funhouse” (to name a few).
There’s also a bonus containing these same extras on as Disc 2 of the Blu-Ray and the case also contains a special 100 page collector’s booklet, detailing the directors works, by horror journalists Brad Stevens and Callum Waddel, illustrated throughout with archive stills.
Again, “Texas Chainsaw Massacre 2” is a film that sharply divides fans of the series. However, if you’re looking at adding this title to your collection, then this Special Edition Blu-Ray from Arrow films is infinitely better than previous bare bones DVDs released here in the and contains a whole additional stack of extras that aren’t on the US .
Buy the UK BD from Amazon.co.uk
Posted by Dark Angel at 20:51