Arrow to release Brian DePalma's "The Fury" on UK BD. 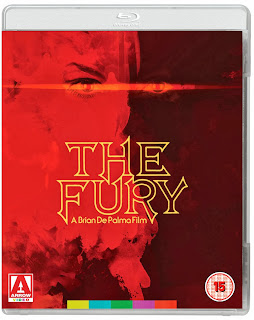 One of De Palma’s best loved films, this new version of THE FURY has been painstakingly restored from the original camera negative, a process overseen by master technician James White (who also restored the acclaimed Arrow Video release of Zombie Flesh Eaters in 2012).

Starring living Hollywood legend Kirk Douglas alongside John Cassavetes (Rosemary’s Baby, The Dirty Dozen) and Carrie Snodgress (Diary of a Mad Housewife), THE FURY sees Cassavetes’ most sinister performance since Rosemary’s Baby, as a man who kidnaps the telepathic son of his colleague (Douglas), aiming to turn him and similarly gifted individuals into human weapons. Meanwhile, Gillian (Amy Irving), is worried enough about the destructive potential of her own powers to agree to be institutionalised – but is the Paragon Institute all that it’s cracked up to be?

Special features included on the deluxe edition of THE FURY is as follows:

- "Blood on the Lens": An interview with Cinematographer Richard H. Kline.
- "Spinning Tales": Fiona Lewis on starring in The Fury.
- "The Fury - A Location Journal": An interview with Sam Irvin, intern on The Fury, author of the film’s shooting diary and then correspondent for Cinefantastique magazine.
- Original archive interviews from the 1978 promotional tour, featuring Brian De Palma, producer Frank Yablans and stars Carrie Snodgress and Amy Irving.
- "Double Negative": A short film tribute to Brian De Palma by Sam Irvin, starring William Finley.
- Gallery of behind-the-scenes production images.
- Reversible sleeve featuring original and newly commissioned artwork by Jay Shaw.
- Booklet featuring new writing on the film by Chris Dumas, author of Un-American Psycho: Brian De Palma and the Political Invisible, as well as a re-print of a contemporary interview with Brian De Palma, and a brand new interview with screenwriter John Farris on the writing of the film, his and De Palma’s unrealised adaptation of Alfred Bester’s The Demolished Man and more, illustrated with original stills and posters.

Buy the UK Blu-Ray at Amazon.co.uk