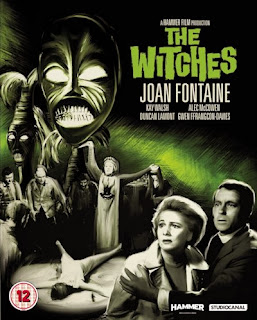 Hammer films lesser known cult classic “The Witches”, starring Joan Fontain, has recently been restored and digitally remasted by Studio Canal for their upcoming Blu-Ray/ release, which will also be premiering at the London Film festival this month (October).
In this, Joan Fontaine plays Gwen Mayfield. A devout schoolteacher who’s been recovering from an extremely nasty ordeal she experienced in , after angering the local witchdoctors, whilst she was out there doing missionary work.
Offered a teaching position in the quintessentially English , it seems like the perfect opportunity for her to start over again. But it isn’t too long before she begins to suspect something’s amiss in the village.
It starts off with a couple of mysterious “accidents”, which don’t seem to be so accidental, yet these are casually brushed aside by the local authorities. She also notices that the villagers seem to behave rather strangely around one of the girls at her school.
Suspecting the locals may be involved in some sort of occult, or pagan practices, Gwen starts to look into these incidents herself, but is attacked in her home by someone wearing an African witchdoctors mask. It seems someone is trying to cause her to have another break down, so that no one will take her concerns seriously.
But what is really going on in the village, and why were her employers really so keen on hiring her?
Based on the novel “The Devil’s Own” by Peter Curtis and adapted for the screen by Nigel Neale (The Quatermass Experiment), this is an interesting psychological horror, which shares similar themes to “The Wicker Man”, though actually pre-dates that film by several years.
Hammer fans will undoubtedly want to check this one out. Look out for 70s comedy actor Leonard Rossiter (Reginald Perrin, Rising Damp) in one of his few straight roles, playing the village doctor. Also look out for Rudolph Walker (Patrick from "Eastenders", or if you’re old enough to remember Bill from “Love thy Neighbour”) who has a brief role during the films intro.
The film is released on a BD/ combo pack October 21st, in time for Halloween and contains the documentary “Hammer Glamour” as an extra. This is essentially a 40 minute feature about the women in Hammer films and contains interviews with Caroline Munro, Valerie Leon, Madeline Smith and others.
However, if you fancy seeing this one on the big screen, this newly restrored version of the film will also be premiering at the film festival October 11th.
For more info on the LFF screening click HERE
Buy the UK DVD/BD combo pack at Amazon.co.uk