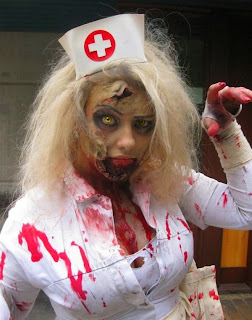 The Circus of Horrors are giving away 100 free tickets to the first 100 people to arrive in full Zombie regalia to the premier of their West End debut at the Lyric Theatre, Shaftsbury Ave at 7.30pm on the 28th October.


All the Zombies have to do is arrive at the theatre by 6,30pm & they will be given a much sought after ticket to the show that is set to send the London’s West end alight with their exclusive brand for Rock Music, Bizarre & Dare Devil Circus act’s.
The Circus of Horrors – London After Midnight.

18 years ago when the Circus of Horrors made it’s debut at the Glastonbury festival nobody believed it would last 18 weeks let alone 18 year’s. Now almost 2 decades later it has finally come of age & becomes the first circus to appear in a resident season in a West End Theatre for 100 years.
The last couple of years has seen the profile of The Circus of Horrors jump tremendously after storming into the finals of Britain's Got Talent & then appearances on various subsequent TV shows, The X Factor, The Slammer, Daybreak, Fairground Attractions, Who wants to be a Millionaire, Body Shockers & Fake Reaction. This combined with the release of the Dr Haze autobiography  Mud Blood & Glitter have certainly made it an exciting time for The Circus of Horrors. The media profile is continuing with large editorial & images in almost every nation newspaper & an further appearance on This Morning & more pending TV shows including a Discovery Channel special. 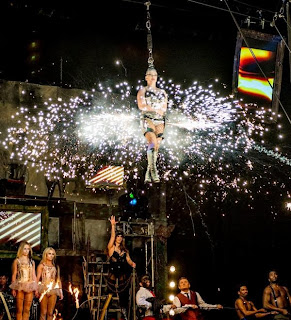 The tour from October to March will see another giant leap for the show when it begin’s a series of dates in The Lyric theatre in London's West End,  a fitting way to celebrate 18 bloody years of Shock n’ Roll.
In addition to the London date’s they will be engaging in a huge British tour, taking in around 100 venue’s in pretty well all of the UK’s major cities from Aberdeen to Truro.
After it’s gruesome begging's at the 1995 Glastonbury Festival it became an instant hit, touring all over the world from Chile to Chatham, Argentina to Aberdeen, Japan to Jersey including festival appearances with Alice Cooper, Eminem, Motley Crue, Oasis, Iron Maiden & The Manic St Preachers and many more.
The West End show’s are particularly significant, taking the extreme to the mainstream without compromise & proof of how far the show has come.
The latest incarnation ‘London after Midnight’ is inspired by the film of the same name. Set in plague ridden London & climaxing with the Great Fire of 1666.

The storey twists and turns with grisly murders and sensational shock’s – all interwoven with some of the greatest and most bizarre circus acts on earth, sword swallowers, knife throwers, daredevil balancing acts, astounding aerialists, a dwarf strong man, hairculian hair hanging beauty, sinister sisters, gyrating & fire limboing acrobats, dislocation contortionist  & illusions designed by Simon Drake (Secret Cabaret) & much more.
Performed by an almighty cast with a forked tongue firmly in each cheek and the devil driver rock n’ roll of Dr Haze & The Interceptors from Hell.
The Circus of Horrors – London After Midnight is on tour throughout the UK
For tour dates & details go to www.circusofhorrors.co.uk