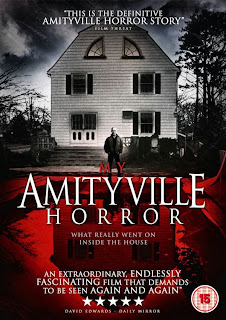 NOT actually another film in the overly long series of haunted house movies, but rather a documentary about Daniel Lutz. The young boy who, with his mother and step-father, moved into the infamous “Amityville” house back in the mid 70s, only to flee the property some 28 days later and who’s story became the basis for the book and subsequent film “The Amityville Horror”.
The film is basically a series of interviews, in which Daniel tells about what happened in the house during their brief time there from his perspective. As well as how the subsequent media frenzy affected him and his siblings and how, even today, he has to deal with being known as the “Amityville Kid” and the strains it puts on his own family.
Most of the discussions are between him and a psychiatrist, though they do visit the property so we can see what it looks like today and there’s an interview with noted demonologist Lorraine Warren, who was one of the people who investigated the house after they left. There is also a brief discussion about whether the Lutz's made it all up, though the film does seem skewed towards accepting (almost unquestionably)  that the events were genuine.
To summarise, the film was basically like an extended version of one of those interview documentary features they have on the Discovery Channel. If you have a genuine interest in the real life events behind the Amityville Horror then you may be interested in this, but if it’s just a cheap scary movie you want to pass a couple of hours then this isn’t it.
The film is being released by Arrow films onto UK October 28th, in time for Halloween. The disc is bare bones without any extras features.
View the trailer on YouTube.