The Curse of Elizabeth Faulkner at The Charing Cross Theatre, London. 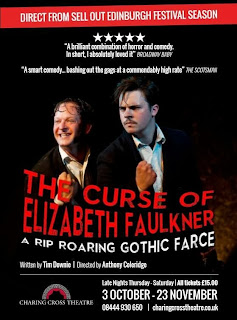 Starting October 3rd, Charing Cross Theatre will play host to 'The Curse of Elizabeth Faulkner' which has just completed a successful run at Edinburgh Fringe.

The play is a rip roaring, thunder soaked gothic farce, from the sand blasted foothills of Peru to the haunted back streets of Edwardian London. Part Grand Guignol, part One Man Two Guvners.
This story, told for the first time and by the kind permissions of the Faulkner and Thorndike Estates, is the true and terrifying tale of a foredoomed young gentleman who convinces an impoverished undertaker to dig up his great grandmother, in order to rid himself of a terrible and somewhat expensive, family curse.
A blistering thrill ride through old England and over dead Empires. Also included is a very useful tip on how to avoid an exploding pancreas, how not to speak to dead people, and a rather interesting fact about the hill tribes of the South Pacific.

The cast includes Mr. Joshua Haberfield as the cursed hero Faulkner, our dashing and over excited undertaker Thorndike played by Mr. Neil Henry. The delicate yet deadly Miss Harriette Sym is Miss Francis and Mr. Anil Desai completes as the mysterious and conflicted Peruvian of no fixed abode.

For more info visit the theatre website at http://www.charingcrosstheatre.co.uk/
Posted by Dark Angel at 17:38