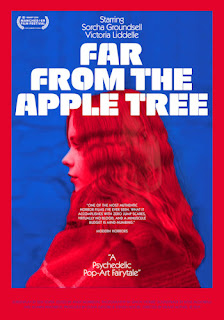 Streaming now on Redemption.TV, Sorcha Groundsell, who recently wowed viewers of Netflix’s The Innocents and Victoria Liddelle (The Outlaw King), star in FAR FROM THE APPLE TREE, an eclectic mix of ghost story, fairy tale and horror.

Judith is a struggling art student who lands a dream job of working for a renowned and somewhat sinister visual artist. Judith’s work involves cataloguing the artists’ video footage and in doing so she discovers film sequences of a young woman, the artists’ dead daughter, who looks exactly like herself…

Evocative of the TV series The Owl Service and films like Valerie and Her Week of Wonders and The Wicker Man with a truly magical soundtrack by Rose McDowall (Strawberry Switchblade/Psychic TV) and Shawn Pinchbeck (The Corporation).

Director, Grant McPhee : “I wanted to create something which looked cool and played around with form and structure but also was full of wyrd 70s/80s childhood references. What is now called Hauntology, I suppose”

FAR FROM THE APPLE TREE is available to stream now at https://redemptiontv.net/far-from-the-apple-tree