Novelization of the Cult Hit “MONSTURD” 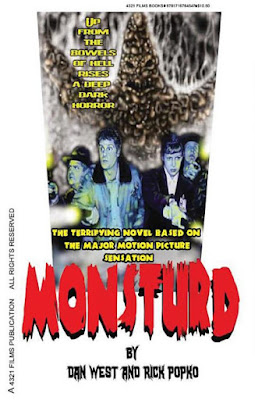 4321 Films, a San Francisco-based independent motion picture production company, have announced the release of MONSTURD, the terrifying novelization based on the major international motion picture sensation. The new book, available now as a paperback or electronic download from Amazon, was penned by the 2003 movie’s original creators Dan West and Rick Popko.

“Strangely, as a movie, Monsturd’s success exceeded our wildest expectations,” said Dan West, co-founder of 4321 Films. “It’s been distributed and reviewed in countries Rick and I have never been to yet, including Russia and Portugal. Over the years, we’ve received quite a few fan inquiries asking if we ever intended to do a sequel. But, I’m afraid that unless Hollywood ponies up a significant amount of cash up front, it’s probably never going to happen. That’s one of the reasons why we wrote this book. While it faithfully retells the events from the movie, it also features a number of new scenes and character expansions that weren’t in the original movie.”

Out of the Toilet… and into Your Nightmares!

Sci-fi and horror movie influencer Scott Foy received an advanced copy of Monsturd and described it as, “Just when FBI Agent Susan Hannigan thought she had flushed away escaped serial killer Jack Schmitt once and for all in the sewers of Butte County, California, a demented doctor at the Dutech Genetic Research Laboratories dumping evidence of his dubious dysentery experiment gone awry unwittingly resurrects Schmitt’s tainted soul as a grotesque golem of fecal fury. Using the bowels beneath Butte County as his lair, the mutated maniac sets about on a path of excremental vengeance and only Agent Hannigan and the ill-prepared local cops can wipe Schmitt’s stain from the face of the earth forever. Deadpan and toilet humor spew from every orifice of the page in this hilariously horrific novel that is now a major motion picture sensation.”

Founder of Scaredstiffreviews.com Geno McGahee, who also received an advanced copy of the book said, “Now, Monsturd has returned in book form and tells more of the story without the restrictions that producing a film brings. I wish they did this with more low-budget horror films. West and Popko deserve a lot of credit for going in this direction and for also writing a funny and zany book that kept me entertained from start to finish.”

“Monsturd is the perfect gift for that strange friend who has everything but likes collecting weird things. We had a lot of fun writing it over the last few years and believe that enthusiasm has translated well onto these pages,” West concluded.

Paperback and electronic download versions of Monsturd are available today from Amazon.

Buy the Paperback from Amazon.com

Buy the Kindle Edition from Amazon.com