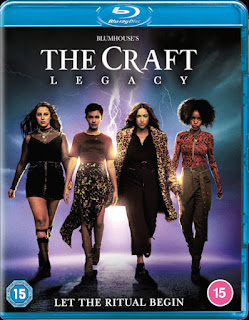 The bewitching Blumhouse continuation of cult hit The Craft, THE CRAFT LEGACY, is available on DVD and Blu-Ray from Sony Pictures Home Entertainment March 8th.

An eclectic foursome of aspiring teenage witches gets more than they bargained for as they lean into their newfound powers.  When her mother Helen (Michelle Monaghan) decides to move in with her self-help guru boyfriend (David Duchovny), loner teenager Lily (Cailee Spaeny) has her life uprooted. When she finds a new group of friends in a coven of witches, they have fun together flexing their powers. That is, until dark events occur.
BLUMHOUSE’S THE CRAFT LEGACY: DVD & BLU-RAY BONUS MATERIAL

THE CRAFT LEGACY is also available in a 2-Movie Collection boxset, alongside the 90s classic THE CRAFT, which celebrates its 25th Anniversary this year.

The boxset is available to buy on Blu-ray and DVD on March 8th.