Amicus Productions THEY CAME FROM BEYOND SPACE on Disc and Digital, March 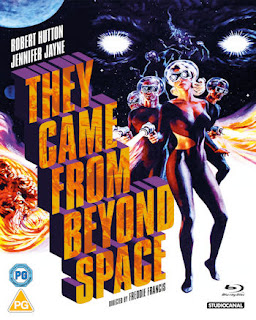 STUDIOCANAL presents a brand-new restoration of the Amicus Productions’ cult 60s sci-fi horror THEY CAME FROM BEYOND SPACE from the legendary director of The Evil Of Frankenstein and Dr Terror’s House Of Horrors, Freddie Francis.

When meteorites crash-land in the perfect formation of the letter V, the Ministry of Extraterrestrial Life on Other Planets (MELOP) led by Dr. Curtis Temple (Robert Hutton) is sent to investigate. The scientists and local bystanders soon find themselves possessed by an alien force which wants to enslave them.

No one is immune from the invasion except for Dr. Temple, who is shielded from the meteor’s influence by a metal plate that was inserted to protect his skull after a recent accident. He discovers that an alien race on the moon seeks to use the manipulated scientists for secret purposes. But, as Temple learns more about the invaders, he realises that they may not be as evil as he once thought.

Starring Robert Hutton, Jennifer Jayne, Zia Mohyeddin and Bernard Kay THEY CAME FROM BEYOND SPACE was written by Milton Subotsky, the acclaimed screenwriter of Dr Who and the Daleks and Tales from the Crypt, adapted from the book ‘The Gods Hate Kansas’ by Joseph Millard.

An enjoyably camp B-movie, the Amicus producers followed in the tradition of 50s classics such as Invasion of the Bodysnatchers adding some 60s kitsch-styling and ingenious low-budget special effects for this British retro treat.

THEY CAME FROM BEYOND SPACE  is available to buy on Blu-ray, DVD and Digital formats from 8th March 2021.