ARROW - a superb new premium streaming site for exclusive film premieres, curated cult and arthouse classics, and critically acclaimed TV from all over the world has launched in the UK. An absolute must for connoisseurs of the finest in screen entertainment! 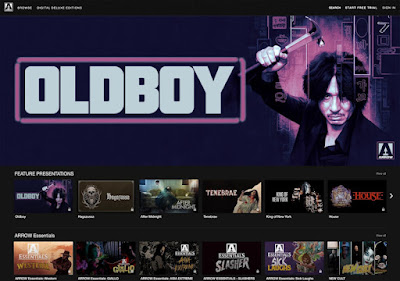 ARROW​ will also strive to debut the very best in new releases each month, with the exclusiveworld premiere of Adam Stovall’s festival smash-hit ​A GHOST WAITS​ this February. New titles already available include the extraordinary documentary ​THE EL DUCE TAPES ​and slow-burnhorror standouts ​THE BLOODHOUND ​and​ AFTER MIDNIGHT​. Future debuts will see the exclusive premiere of the sensationally shocking ​THE STYLIST ​in March, whilst must-see filmdocumentary ​CLAPBOARD JUNGLE​ will debut on the platform in April.

Expanding beyond the Arrow Video label, ​ARROW​ will feature the very best internationalcinema and TV, such as Giuseppe Tornatore’s ​CINEMA PARADISO​, and outstanding crime series GOMORRAH ​and ​THE BRIDGE​; as well as brand-new short films from upcoming filmmakers,original ​ARROW​ productions, and curated seasons. ​

ARROW​’s ​Digital Deluxe​ editions include rarely-seen and newly-created extras and exclusive interviews, to give audiences a deeper enjoyment of the films they love, while ​ARROW Essentials​ makes navigating through the world of ARROW much easier with collections based on genre, decades and theme; and ​ARROW Stories​ takes a fresh look at the world of film and TV with exclusive documentaries, interviews and video essays digging deeper into the many curated seasons and titles on the platform for amuch richer and deeper viewing experience.

With a slickly-designed and user-friendly interface, and an unparalleled roster of qualitycontent from westerns to giallo to Asian cinema, trailers, Midnight Movies, filmmaker picks andmuch much more, ​ARROW ​is ​the​ place to go for the very best in on-demand entertainment