SATOR : THE BEAST WITHIN - coming to Disc and Digital 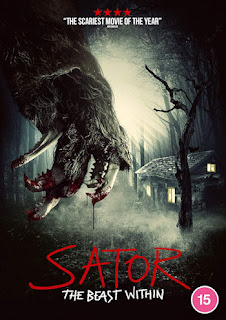 Arriving on Digital and on DVD this month, SATOR is a chilling and atmospheric slice of slow-burn horror that follows Adam (Gabe Nicholson), who lives a life of isolation in a desolate forest.

He spends his days hunting for food and keeping watch for a supernatural entity called Sator. Adam and his brother Pete (Michael Daniel) have been told to be wary of Sator by their grandmother, Nani (June Peterson), who claims that this spirit has been guiding her through life as a whisper in her ear.

But whether or not the spirit plays any part in the death of family members remains a mystery. A film that will stay with you for weeks.

Written, directed, scored and produced by Jordan Graham over a seven year period, this is his first feature film and was almost a solo labour of love, which spent years in post production alone. SATOR enjoyed a successful worldwide premiere at Fantasia and a UK premiere at the Soho Horror Fest in 2019.

The plot is inspired by real life events surrounding the director's grandmother, who also makes a cameo appearance in the film.

SATOR : THE BEAST WITHIN is released to UK Digital outlets on 15th Feb and is available on DVD from the 22nd Feb from Lightbulb film distribution.