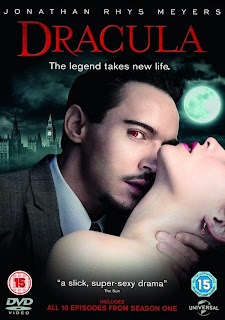 From the makers of Downton Abbey and The Tudors comes a brand new imagining of a classic, DRACULA: THE COMPLETE FIRST SERIES comes to DVD and Blu-ray on 10 February, from Universal Pictures (UK).
Set in Victorian London, DRACULA is a startling re-invention of one of humanity’s most potent myths.
It is 1881, and somewhere in Romania a shadowy figure pours fresh blood on to an ancient sarcophagus, awakening a dormant corpse. Fifteen years later, we are introduced to the infamous impaler as he arrives in London posing as charismatic American entrepreneur ‘Alexander Grayson’.
Dracula seduces the social elite with talk of bringing modern science to Victorian society. Performing an elaborate stunt to revolutionise the electricity industry, Grayson’s breakthrough alarms some of his well-heeled guests, who have business interests of their own at stake. In dazzling his new and willing prey, Grayson hopes to disguise his true intent - to wreak revenge and havoc upon the people who reuined his life centuries earlier. There’s only one obstacle that threatens to thwart his plan: Dracula begins to fall hopelessly in love with a woman who seems to be a reincarnation of his dead wife.
Golden Globe winner Jonathan Rhys Meyers (Mortal Instruments: City of Bones, The Tudors) leads an outstanding cast including the enchanting Jessica De Gouw (Arrow) as trainee doctor and muse Mina Murray, Katie Mcgrath (Labyrinth) as social butterfly Lucy Westenra, Oliver Jackson-Cohen (Mr Selfridge) as curious reporter Jonathan Harker; Thomas Kretschmann (Wanted) as Abraham Van Helsing and the stunning Victoria Smurfit (Cold Feet) as Lady Jane Wetherby.
Give the gift of eternal love this Valentine’s Day, as Dracula comes to DVD and Blu-ray on 10 February 2014, from Universal Pictures (UK).

- Making of Featurettes
- Deleted Scenes
- Alternate US cut of episode 3