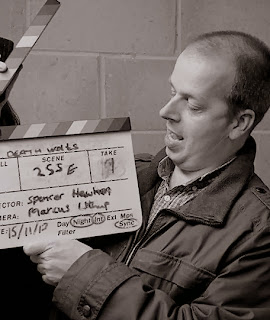 Last year Spencer Hawken (pictured left) and Lucinda Rhodes created the movie "Death Walks", they followed this up with a very different horror story "Revisited". Now they begin work on "No Reasons", a thriller centered around every parents nightmare.
Set in Brentwood and Hornchurch the movie begins with the disappearance of 14-year-old Jodie, the movie then follows an 18 month journey for the parents as they try to discover what has become of their daughter. It's not until a private investigator steps in however that a terrible secret, and a hidden underground world becomes exposed.
The movie is being shot for a modest £30,000 which in movie terms is very little indeed, yet the creators have gathered a very interesting cast together that includes some big names from yesteryear. "I'm a big believer in picking up people that have been forgotten by the mainstream, we have a clutch-full of very popular former Eastenders stars, a once Oscar nominated actress, and some familiar faces doing something very different to how we normally see them." Says Spencer Hawken "Some of whom we have already gone public with, others we are keeping tight lipped about for as long as possible. I love when your sat watching a film or a TV show and suddenly this familiar face pops up you were not expecting."
Hawken describes No Reasons as a tale unlike any other, a bit like Grange Hill meets Saw. "I'm a big believer in not doing what others are, "No Reasons" is a genre-jumping movie, with some very edgy ideas, and a very vivid imagination."
Names currently attached to the project include Daniel Peacock (Robin Hood - Prince Of Thieves), and Jessie Williams (TV's Tracy Beaker and The Dumping Ground).
"No Reasons" films in February with the hope of getting it into the end of year festivals.
For more info, visit Hawken-Rhodes productions on Facebook and Twitter
Posted by Dark Angel at 16:12