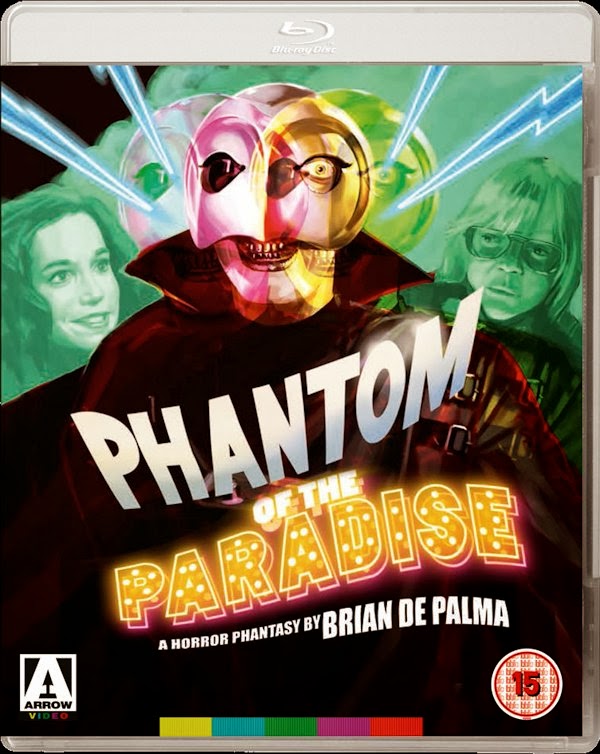 Arrow Video is thrilled to announce the release of Brian De Palma’s seminal horror fantasy Phantom of the Paradise coming to Blu-ray for the first time in the UK on 24th February.
One of 2014’s most hotly anticipated titles from the Arrow Video label, Brian De Palma’s Phantom of the Paradise came hot on the heels of his early horror film Sisters. An inspired rock ’n’ roll fusion of Faust, The Phantom of the Opera and The Picture of Dorian Gray boasts an Oscar-nominated score by Paul Williams, who also stars as an evil record producer who not only steals the work of composer/performer Winslow Leach (William Finley) but gets him locked up in Sing Sing - and that’s not the worst that happens to him along the way.


Few revenge scenarios have ever been so amply justified, but the film is also constantly aware of the satirical possibilities offered by the 1970s music industry, exemplified by Gerrit Graham’s hilariously camp glam-rock star.  Jessica Harper (Suspiria) appears in her first major role as the naïve but ambitious singer, on whom Winslow secretly dotes.

Prodigiously inventive both musically and visually, this is one of De Palma’s most entertaining romps, not least because it was so clearly a labour of love.

This feature-packed disc will be released as both a Limited Edition SteelBook and deluxe Blu-ray featuring original and newly commissioned artwork by The Red Dress. This exciting Blu-ray release will also include an exclusive collector’s booklet featuring new writing on the film by festival programmer Michael Blyth and an exploration of the film’s troubled marketing history by Ari Kahan, curator of SwanArchives.org, illustrated with original stills and promotional material.