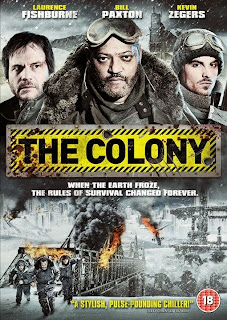 "The Colony" is coming to UK DVD. By 2045, humans have built weather machines to help control the devastating threat of global warming, but when these machines unexpectedly break down the planet is plunged into sub-zero temperatures and sent into the next ice age. The lucky few that remain are forced to live underground in bunkers to escape the extreme cold.
Briggs (Laurence Fishburne) and Mason (Bill Paxton) are the leaders of one such bunker, Colony 7. After receiving a distress signal from a neighbouring bunker, Briggs decides to lead a dangerous mission into the frozen wasteland, accompanied by the strong-minded Sam (Kevin Zegers), determined to discover their fate.

Upon arrival they discover a desolate place with walls covered in blood and a savage threat much worse than anything they’ve encountered before. If Briggs & his team are to ensure the continued existence of his colony, and survivors all-over, they must battle to save themselves and protect their fellow colonists in what might be humanity’s last stand.
By far one of the most terrifying dystopian visions of the future, The Colony is the more fearful, chilling cousin to The Walking Dead. Wielding an incredible cast including Hollywood titans Laurence Fishburne and Bill Paxton, alongside horrors’ rising star Kevin Zegers, The Colony is one hell of a blood-curdling thrill-ride that’ll chill you to the bones!

"The Colony" is released to UK DVD on January 20th from Entertainment One.