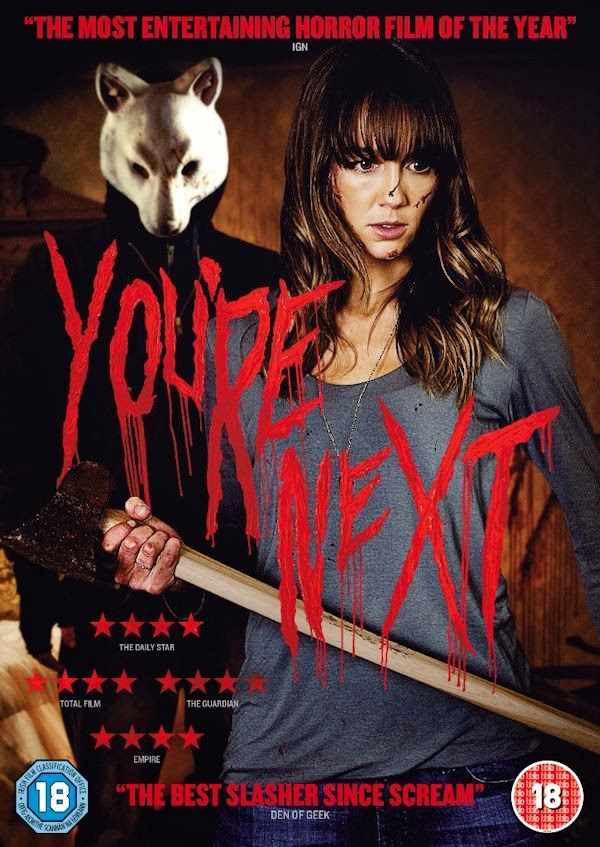 "You're Next" is out on UK DVD and Blu-Ray this month from Lionsgate films, and I was fortunate enough to get an advanced look at the DVD.
A wealthy retired couple are having a family re-union at their remote country mansion, with their  4 grown children and their respective partners. When their party is gatecrashed by a group of masked attackers, who proceed to fire crossbow bolts at them from outside.
Having either killed, or injured, several family members, the killers subsequently try to enter the house to finish them off. Only to come up against young Erin (Sharni Vinson - Bait 3D), one of the son's new girlfriends.
It seems her father was an ardent survivalist and she happens to know a thing or two about military training. As the intruders discover, as she turns the tables on them, laying traps, and taking them out with various kitchen utensils and items from the father's toolbox.
Rather like an extremely violent cross between "Panic Room" and "Home Alone", I found this film to be tremendous fun. It was good to see a story in which the heroine is an arse-kicker, who's not content to just knock her attacker down, but to repetedly pound his head till she knows he isn't getting up again (a first I think)!
Directed by Adam Winguard (V/H/S) and featuring horror veteran Barbara Crampton (Re-Animator), along with appearances by film makers Joe Swanberg (V/H/S) and Ti West (Cabin Fever 2), "You're Next" was definitely one of my favourite cinema releases of 2013.  Being action packed, full of gore and containing some wicked black humour, as we discover that everyday household items, like a tenderising hammer, or kitchen blender, can be just as lethal as an axe or machete when put in the right hands.
The film is released to UK DVD and Blu-Ray January 13th. Extras on the disc include a 10 minute "Making-of" feature, which includes interviews with director, cast and crew and 2x Audio commentary tracks that accompany the main feature. The first with director Adam Winguard and writer Simon Barret, in which they mostly discuss the technical aspects of the films. And the second, which also features Winguard and Barret, but are joined by stars Sharni Vinson and Barbara Crampton, which is slightly more jovial, as the 4 share their various anecdotes about their time on set.
The advertising blurb claims "You're Next" was one of the most talked about about horror movies of 2013. I'm not sure how accurate that is, but I do know that I thoroughly enjoyed it and found it extremely entertaining, so would highly reccomend picking this one up on disc when it's released.
Pre-order the UK DVD from Amazon.co.uk