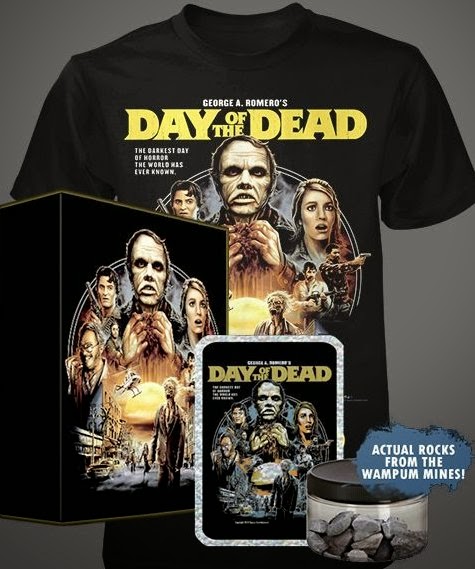 The darkest day of horror the world has ever known is upon us. Pre-orders have launched for Fright-Rags' merchandise celebrating George A. Romero's Day of the Dead
Fright-Rags' limited edition Day of the Dead box set features a shirt designed by Justin Osbourn (available as a T-shirt, girls shirt and zip-up hoodie), along with a canister of rocks taken from the Wampum Mines - the filming location of Day of the Dead. An 11x17 poster and a prismatic sticker round out the set, which is beautifully packed in a collector's box. There are only 500 box sets available, so sizes and quantities are limited.
Zombie aficionados will also want to pick up the limited edition 18x24 screen-printed poster featuring artwork by Gary Pullin. The posters are limited to a mere 200, and each individually-numbered piece is signed by Lori Cardille (who stars in the film as Sarah). Pullin's art is also available on shirts and hoodies. Last but certainly not least is a shirt designed by Jeff Zornow that depicts the gruesome Dr. Tongue leading a horde of undead friends.
These items are now available for pre-order exclusively on Fright-Rags.com until Monday, January 27 at 10am EST. Orders are expected to ship in late-February.
These items can be pre-ordered from the Fright Rags Website
US horror fans also note, in conjunction with the release, Fright-Rags is hosting a 35mm film screening of Day of the Dead at The Little Theatre in Rochester, NY on Friday the 24th of January. Details can be found HERE.