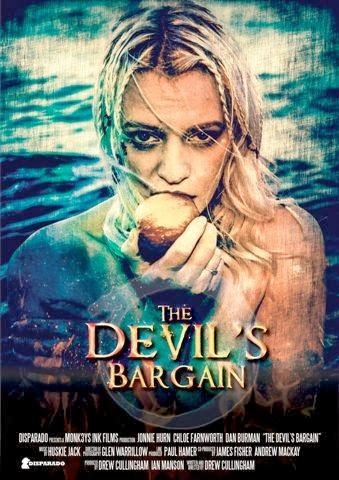 Unseen. Uncertified. Unmissable. Drew Cullingham (UMBRAGE: THE FIRST VAMPIRE, BLACK SMOKE RISING) has written and directed a savage, psychological portrait of love, lust and the end of the world, which will be available to watch for just £3.99 from Mon Jan 17, 2014 (see links below)
It’s 1974 and Earth is about to be obliterated by a massive asteroid. Adi (Jonnie Hurn) and his young wife Ange (Chloe Farnworth), haunted by memories of the death of their son, journey to the idyllic rural setting where he was conceived, determined to shed clothes, inhibitions and psychological traumas before the planet is destroyed forever. But the arrival of Luca (Dan Burman), a charismatic and mysterious young photographer, turns what’s left of their world upside-down and the horror to come is of biblical proportions.
Cullingham told us: “It was made on a shoestring budget in twenty-four hours over four days, using an experimental ‘pinhole’ technique to give it a unique look. Containing copious amounts of full frontal nudity, the mantra for this film has been: No money. No clothes. No fear”.
A Disparado and Monk3ys Ink Films production, written and directed by Drew Cullingham, produced by Drew Cullingham & Ian Manson, co-produced by  James Fisher & Andrew Mackay. Starring Jonnie Hurn, Chloe Farnworth & Dan Burman.
You can view the film online at the Official Website and at Distrify
View the trailer on YouTube.