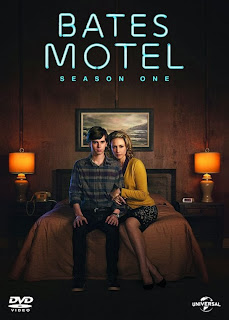 From the producer’s of Lost and Friday Night Lights comes a twisted and gripping story of murder, madness and the power of a mother’s love as the television prequel to cinematic giant Psycho; BATES MOTEL: SERIES ONE is released on Blu-ray and DVD on 3 February 2014, from Universal Pictures (UK).
Already renewed for a second series, this chilling and engaging hit show offers a ‘refurbished’ contemporary prequel to the genre-defining Hitchcock classic, Psycho. Bates Motel promises to delve into the warped mind of the boy already known as one of films most infamous men, Norman Bates. The ten part series will give viewers an intimate portrayal of how Norman Bates’ psyche unravels throughout his teenage years, his deeply intricate relationship with his mother and how the events around him lead him to become the most wicked serial killer in cinematic history.
After finding his father dead, seemingly the victim of a freak accident, 17-year-old Norman Bates (Freddie Highmore) and his mother, Norma (Vera Farmiga - The Departed), move to the sleepy town of White Pine Bay to start over. Norma buys a motel, and they get ready to start their new life.
However, their presence in this small town is not as welcome as they first believed and Norma is forced to take drastic measures to protect herself and Norman, the son she loves and cares so much about. When Norman’s estranged half-brother Dylan (Max Thierot - House at the end of the Street) joins them at the motel, secrets are revealed about the family’s violent past and, as Norman struggles to cope with his deep-rooted psychological issues, Bates Motel reveals some secrets of its own.
Discover a razor-sharp psychosexual drama laced with wickedly dark performances and a retro chic twist as BATES MOTEL: SEASON ONE comes to Blu-Ray and DVD on 3 February 2014, courtesy of Universal Pictures

Extras include Deleted Scenes and Discussion featurette with the cast and creative team.