UNDER THE SHADOW - review

A young Iranian woman has to protect her daughter, not only from the falling bombs of the Iran-Iraq war, but also something sinister that’s lurking in her apartment in Iranian director Babak Anvari’s Under the Shadow, which is released to UK cinemas this Friday, 30th September. 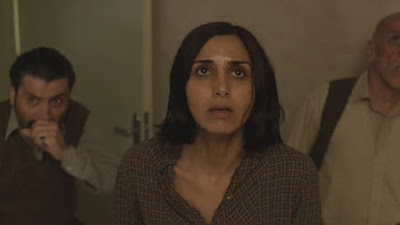 Set in 1980s Tehran, in a post revolution Iran, the Iran-Iraq war is still in full swing. With bombs reigning down on the city, her husband conscripted into the military and other tenants in her building moving out in favour of safer environments, young mother Sheideh (Narges Rashidi) becomes increasingly isolated in her block of flats.

But its seems the constant air-raids may be the least of her worries. When her young daughter starts complaining of strange goings on, she discovers something sinister has taken up residence there. It starts with items go missing, Sheidah then starts having strange nightmares, then her young daughter starts complaining about an imaginary friend who may not be all that imaginary as the ghostly going on start to escalate and they realise supernatural elements are at work…

For a low budget debut film, I was extremely impressed at just how professional this looked and director Babak Anvari manages to successfully capture the fear of living in war-torn Tehrahn and at conveying just how badly women are treated in post-revolution Iran. Sadly, as far as horror films go, I was actually bored by this. One of the problems being that the film is in Arabic, with English subs and generally speaking I’m not a fan of foreign language films, as you spend most of the film reading the subs, rather than watching the movie.

Also, the film was extremely slow. Seems to take ages for anything to happen and what incidents do happen are very few and far between. However, I think the real problem for me was the film was far too reminiscent of The Babadook for my liking, which I wasn’t a fan of either.

Under the Shadows is released to UK cinemas 30th September.