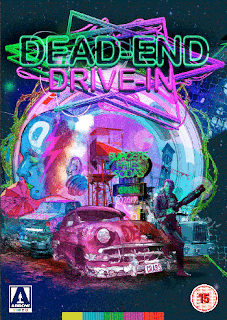 Set in Australia in the not too distant future, society has broken down into a semi-dysotopian state. Unemployment is high, crime is rife and gangs of punks known as "Cowboys" cruise around in beat up cars, looking to scavenge parts from traffic accidents.

Young 'Crabs' (played by "Prisoner : Cell Block H" star Ned Manning) is one of the few people lucky enough to have a job, but when he takes his girlfriend Carmen (Nathalie McCurry) to a Drive-In theatre, he tells the desk clerk they're unemployed so he can get in at a concessionary rate. Something he will later come to regret.

Whilst him and his girlfriend are indulging in a bit of hanky panky in the back seat, somebody swipes the wheels off his car, meaning they're stuck there for the night. It's only the following morning when the other cars have left, he realises there's quite a few other cars that have been immobilised and it looks like many of them have been there a while.

Yes, it turns out that the place is actually an elaborate trap, designed to ensnare the unemployed and undesirable types to keep them off the street, and now they're effectively prisoners. Stuck inside the theatre with gangs of various punks and low-lifes, Crabsie is of course not too happy about this and wants out. But being stuck in the middle of nowhere and with no serviceable transport, that’s going to be no easy task. Particularly when the other people there seem to rather like getting free movies and free junk food.

But he's not going to let that stop him, so when the government start bussing in more homeless people, he seizes his chance, steals a tow truck and one of the most outrageous police chases and shoot-outs ever seen, quickly ensues around the drive-in lot.

Filmed at an actual disused Drive-In theatre in Matraville, Sydney (which was pulled down shortly after), the film is rather ridiculous, but thoroughly enjoyable at the same time. Director Brian Trenchard-Smith seems to have been heavily influenced by the first Mad Max movie, except this seems to be more of a campy comedy than a straight action film. But then that is to be expected from the director who gave us "Turkey Shoot" and "Leprechaun 3 & 4" (the former title can even be seen rather cheekily playing on the Drive-In screen in one scene).

The film had previously been available as part of Arrow’s ‘Arrowdrome’ collection, which came on a bare-bones DVD. This release was struck from a brand new High Definition 2K scan of a film print and contains a slew of special features.

-Audio commentary track with Brian Trenchard Smith – Which is a highly entertaining trivia track about the making of the film. In which he shares such gems as to how he deliberately put scenes that had been cut by the US censors from his film Turkey Shoot on the Drive in screen during key scenes in the film to annoy them.

-The Stuntmen (48mins) –  One of Brian Trenchard-Smith’s earliest works, a 1973 behind the scenes TV documentary about how stunt performers pull off their daring feats on camera (in full-screen and in standard definition).

-Hospitals Don’t Burn Down (24mins) – Intended as one of those industrial safety videos, a dramatised documentary from 1978, in which how failure to comply with health and safety regs and lack of fire safety training leads to a series of deaths when a discarded cigarette starts a fire in a hospital (in full-screen and in standard definition).

-Vladimir Cherepanoff Gallery – Image gallery of behind the scenes stills of Australian Graffiti artist Vladimir Cherpanoff, providing the graffiti art that gave the film locations their run down look. Interspersed by a text essay about how him and some friends got busted one night whilst graffiti-ing train carriages in a rail yard.

The sleeve also has reversible artwork, featuring the original poster on one side and newly commissioned artwork by Chris Malbon on the other. The first pressings of the Blu-Ray will also contain a fully-illustrated collector’s booklet inside the case, featuring writing on the films by Cullen Gallagher and Neil Mitchell

The film has also been released separately in a special edition DVD, which contains the exact same extras on (but not the booklet).

Overall, a vast improvement over the previous bare-bones DVD. Was really pleased to find a directors commentary track on here, which was both as insightful as it was amusing. Making this release a must for cult movie, or Ozploitation enthusiasts.