The Hills Have Eyes meets The Running Man as cult horror icon and hard rocker Rob Zombie returns with an ultra-violent grindhouse-infused slasher, directed with his inimitable, no holds barred style, with an all-star cast headed up by the legendary Malcolm McDowell (Clockwork Orange).

Check out the new UK trailer below...

A camper van of carnival workers are kidnapped in the middle of nowhere by a trio of debauched decadents. Set loose in a derelict factory compound full of creepy passages containing nasty traps, the abductors, led by the maliciously murderous Father Murder, place bets on who will survive the longest in a 12-hour period of pain and maim against an array of sadistic clowns with such charmingly clear-cut nicknames as Psycho-Head, Sick-Head, Death-Head and Sex-Head. You have been warned! 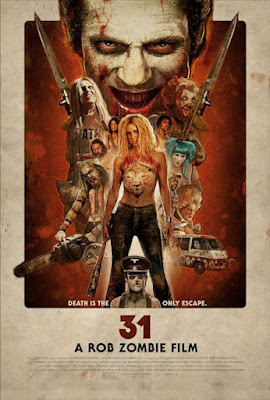 Sure to be devoured by Zombie’s legion of fans, eager to sink their teeth into his latest trademark offering, 31 is a sick, slick blood-drenched rock ‘n’ roll rollercoaster ride of terror. So sit back, strap yourself in, and break out the popcorn. In hell, everybody loves popcorn.