The UK Festival of Zombie Culture in Leicester, which is now in it's 10th year, have announced the first 3 films that will be screened at this years event in November. 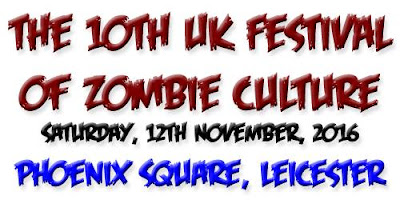 ATTACK OF THE LEDERHOSEN ZOMBIES..

The hills are alive with the sound of screaming.

When abandoned snowboarders seek shelter in a garish, loud aprés-ski tavern, things go from bad to worse when a scientific experiment conducted by a local entrepreneur unleashes an epidemic of zombies and mutant wildlife.

But this is mostly lost on the local drunkards as they themselves are not always so easy to distinguish from zombies. Steve, Branka and Josh have to find a way to survive this hellish night.

NIGHT OF SOMETHING STRANGE....

Outrageous horror with a crazy non-stop gore feeling only ever found before in the 80s.....

Teenage friends out for beach week get unexpectedly detoured to a isolated motel where a deadly STD virus now runs rampant, turning those infected into the living dead, schlock comedy horror has a zombie-like Sexually Transmitted Disease wreaking havoc in the remote Redwood Motel during spring break.

Only the strong and resilient will survive the monster genitalia, fanged orifices, wet farts and bloody condoms!

A new breed of zombie movie has arrived

Not content in sitting back and waiting for the Zombie Apocalypse to consume the world, Craig (Stuart Brennan) prepares for a potential outbreak by stocking up on cans, packing emergency bags, selecting the right tools and even planning his escape routes etc. But when a zombie outbreak actually occurs, it will take all his will to stick to his plan and all of his courage to change it...

Emotive, dark and brilliantly made it is also one of the first zombie films to pose the question "Why survive"???

More films are to be announced.

The festival will also feature the Arcade of the Dead, with some of the Ultimate Zombie games of All Time!

The Best Dressed Zombie Competition is again on the cards with a spectacular prize for the best zombie in attendance...

There will also be Gavin Gore leading his Make Up Artists, turning you into a rotting flesh muncher, so if you need a hand with your make up , then dress undead and get your make up done once you’ve arrived...

Several prolific zombie authors will also be coming down to meet, greet, chat and sign their books for everyone.

The festival takes place on Saturday the 12th of November, at the Phoenix Arts Cinema, Phoenix Square, Leicester,  LE1 1TG.