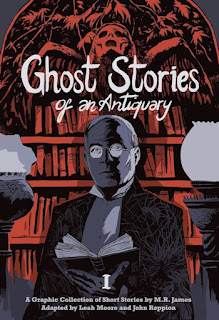 SelfMadeHero is pleased to announce the publication of John Reppion and Leah Moore's MR James adaptations, GHOST STORIES OF AN ANTIQUARY: VOLUME 1, just in time for Hallowe'en.

Adapted from the short stories of M.R. James, master of the English ghost story, this volume re-imagines four of his most compelling stories in graphic form. These atmospheric, terrifying supernatural stories are to be read on a dark winter’s night with the wind blowing outside and the fire dwindling to a glow.  M.R. James had an enormous influential on many horror writers including Ruth Rendell and Neil Gaiman.

Canon Alberic’s Scrap-book tells of an English tourist who, on a visit to a Cathedral at the edge of the French Pyrenees, buys an ancient manuscript containing a mysterious and demonic illustration that isn’t confined to the page. The story is illustrated by Aneke, a Madrid-based comics artists who has worked on Red Sonja and Vampirella, among others.

Lost Hearts recounts the tale of an orphan who is sent to stay with his elderly cousin, an alchemist obsessed with his own immortality. Drawn by London-based Kit Buss, whose previous work includes Channel 4’s The Thrill Electric and Geek and Sundry’s D&G based show, Critical Role.

In The Mezzotint, a university museum curator acquires a print that seems to change with every subsequent viewing. Illustrator Fouad Mezher works in comics and children’s books. Based in Lebanon, his comics have appeared in Samandal Comics Magazine and Risha Project, among others.

The Ash-tree: Sir Richard Castrington inherits a country seat that has been cursed since the times of his ancestors. The rumours of witchcraft seem to emanate from an ancient ash tree. Scotland-based Alisdair Wood works primarily in video games on cult franchises such as Grand Theft Auto and Max Payne. He is co-creator of anthology comic, Horrere.

M.R. James (1862 – 1936) has had an enormous influence on many writers, including Ruth Rendell and Neil Gaiman. He himself was an admirer of Shakespeare and Agatha Christie, but heavily critical of James Joyce and Aldous Huxley.

M.R. James’s stories reflect the author’s own love of medieval studies. Intended to be read aloud, it’s not surprising that many of his tales have been adapted regularly by the BBC for radio and television, and are considered the perfect Christmas ghost stories.

Ghost Stories Of An Antiquary: Volume 1 is published by SelfMadeHero on 27 October (64pp, colour, paperback, rrp £9.99).

Pre-order the graphic novel from Amazon.co.uk