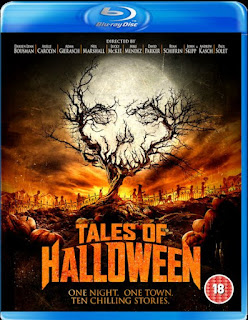 Good news everyone, the wickedly tongue-in-cheek horror anthology Tales of Halloween is finally being released to disc in the UK on Blu-Ray and DVD this October.

Tales of Halloween is the ultimate viewing this Halloween, bringing together eleven of the finest directors working in horror today along with several icons of the genre and some future ones-to-watch. With plenty of frights and the blackest of comedy, Tales of Halloween is for anyone who loved Trick ‘r Treat and wants to scare themselves silly come the biggest, baddest night in the horror calendar.

Named “The best horror anthology since Trick ‘r Treat” by Fangoria and “Among the best Halloween-themed horror movies ever made” by DailyDead, Tales of Halloween weaves together ten chilling tales from horror’s top directors including Neil Marshall (The Descent), Lucky McKee (The Woman) and Darren Lynn Bousman (Saw II, III & IV).

Previously available on VOD, for those of you longing for a hard copy, the film is released to UK DVD and BD from 24 October and will also be available on Digital HD from 17 Oct.

Video Diaries: 2-3 Video Diaries for each segment of the anthology, featuring interviews with the directors, cast, and crew, and sneak peeks behind the scenes on set