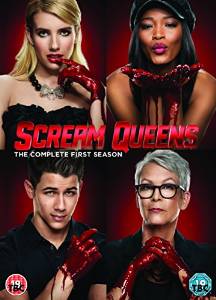 SCREAM QUEENS, TV’s most mischievous and addictive new series arrives on UK DVD 26 September and lead actress Jamie Lee Curtis was more than happy to provide this interview about the show for us....

Q: What was it about this show that made you really want to be a part of it?

Jamie:    You know what, honestly, people have this weird idea that actors are sitting there with stacks of scripts around them like, you know, no, I'm not gonna do that one. No, I'm not gonna do that, you know. No, I mean it's just not the case. We're all trying to get a job. When you get older and you just don't get as many jobs. I don't care if you're a man or a woman. And it's rare that somebody calls you up and says come to my office. Hi, I'd like to write a TV show for you. It's going to be super-funny, super wicked, really smart, really social commentary about the world at large. And you're going to have a great time and it's going to get wild success. There's just not that often that that happens and it's happened to me three times. And every time it's been a wild success. And every time they have written it for me.

Now, that doesn't happen to me. Most people don't write me things. So when they do, whatever alchemy that is, it has seemed to work out really, really well. So it worked out in True Lies, which James Cameron called me at my house and said I'm going to write this. John Cleese wrote A Fish Called Wanda for me with, in that way, I'm going to write this for you, Kevin Kline , Michael Palin, we're going to have a great time, we're going to all make a lot of money. And it'll be really funny. And then the same thing with Ryan Murphy. So there is no decision. It's not lending, it's partnering, having somebody believe in you. And to be honest, I’ve been an actor for a long time and I have not had that most of the time. Most of the time I'm trying to get the job from you three. I'm trying to convince you that I should play Dean Munch in your show, that you're meeting me and then the 1500 other women my age who are in show business, who are trying to get your job, this job.

Q:    So a perfect scenario situation.

Jamie:    Well, it's the dream situation and it's not one you can make happen. There's nothing I can do to make that happen, except live my life, and then the phone rings. And I know that seems like a hackneyed cliché, and yet it's the absolute truth. There's nothing you can do to make that happen with all the frickin social media in the world. I can't make that happen. I can just do what I do. I was hiking in the mountains, four days ago. Do you know what I mean? And it's like, you can’t make it happen. And what you really need is good writing. And each of those movies, True Lies, written by Jim Cameron. Hilarious movie. Written by a guy you wouldn't say is a comedy writer. John Cleese wrote A Fish Called Wanda. He wrote the jokes. You know, the London Underground is not a political movement. That's a joke. And it's frickin funny. And Ryan Murphy, and Brad Falchuk and Ian Brennan wrote Scream Queens. And I've been able to throw some lines down in Scream Queens that make me, I have to. Here's what you don't know about me. You see that paper clip? May I borrow it for a minute?

Jamie:    When I'm in a scene, with Emma Roberts or the girls. Or the really funny people on the show, Nasim Pedrad, Niecy Nash. When Niecy Nash works, go on Twitter to Niecy Nash. You will see. I do scenes where I hold a pen under the table, and I jam it into my hand.

Q:    Is this a trick you've utilized for a while?

Jamie:    My entire career because I laugh. If it's funny, I will laugh. So I cannot hold it. I think Kevin Klein won't speak to me because I ruined more two shots with him when he did something funny that I wasn't expecting him to do. I said look, I can handle the joke that’s written, I hear it, I learn it.  I know the joke is coming. But if you improvise a joke and I'm not expecting it, I'm going to ruin it. And I have come up with this and I do it like this. If you see a scene and my hands are on the table and I'm with Niecy Nash, you know what's in my hand.

Q:    A lot of the girls in the cast seem to really admire you. What's it like working with them?

Jamie:    You know what, I'm a mom of a 28 year old and a 19 year old. I understand that's what older women or, older people get. You have more experience; you've been around a long time. Obviously this is a world I've inhabited a lot. So it’s natural that I will be maternal, because I am a mom, and that's what I look for.  I appreciate that it's hard for me to comment on it 'cause like, you know what I mean, it's not.

Jamie:    They are wickedly talented and what I've learned is that when you show up for a Ryan Murphy show, there has not been one second where people have shown up on set with your white piece of paper, like this. All right, what are we doing today? What are my lines? Like, people show up and are like, boom (noises) cut. Okay, your turn. (noises) Like there's none of that.  And you see that on TV shows, you see these people walking around 'cause they don't like their job and they're like. And that's just not the case. These girls have shown up because they know they have been given this precious thing which is great writing. And they know it and like, slam it. I know, we have to go. Thank you.