THE HOLLOW - in US cinemas Oct 7 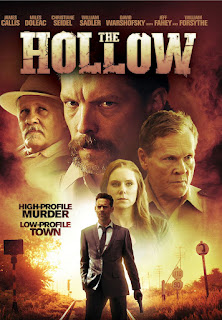 From writer-director Miles Doleac and Academy Award Winning Producer Lisa Bruce (The Theory of Everything) The Hollow – in US theaters October 7 from Uncork’d Entertainment.

James Callis (Bridget Jones’s Baby) stars in the suspense thriller of the year, a stylish and gripping hybrid of Blood Simple and Twin Peaks that’ll have audiences on the edge of their seat.

When a U.S. congressman's daughter passing through a small town in Mississippi dies in a mysterious triple homicide, a team of F.B.I. agents descends to investigate, the team's brilliant but jaded lead agent battling demons both past and present, as his beautiful, tough-as-nails partner tries to hold him and the case together. They find a struggling and corrupt sheriff's department, a shadowy and much-feared figure, who seems to be pulling all of the town's strings from his mansion on the edge of town and a local victim with a strange connection to a number of the town's most prominent figures.

The Hollow, also out day and date on VOD, will screen in the following US theatres :