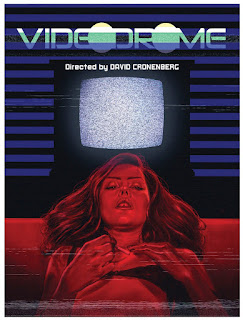 Arrow Video is thrilled to announce the UK Blu-ray and DVD release of David Cronenberg’s visually audacious and stunningly disorienting "Videodrome", which sees the director exploring dangerous sexuality and technological obsessions. The 1983 cult classic, which still feels as relevant today as it did upon its initial release, comes to Blu-ray and DVD on 10th August 2015.


Max Renn (James Woods) is looking for fresh new content for his TV channel when he happens across some illegal S&M-style broadcasts called ‘Videodrome’. Embroiling his girlfriend Nicki (Debbie Harry) in his search for the source, his journey begins to blur the lines between reality and fantasy as he works his way through sadomasochistic games, shady organisations and body transformations stunningly realised by the Oscar-winning makeup effects artist Rick Baker.
Hailed by his contemporaries John Carpenter (“he’s better than all of us combined”) and Martin Scorsese (“no one makes films like he does”) as a genius, Videodrome, was Cronenberg’s most mature work to date and still stands as one of his greatest.

Joining a roster of previously released Cronenberg titles on the Arrow Video label (Rabid and Shivers), this 4-disc set comes loaded with exclusive director-approved content including David Cronenberg’s previous unavailable short films Transfer (1966) & From the Drain (1967) and newly restored early features Stereo (1969) and Crimes of the Future (1970). Alongside a wealth of archival content, this lavish new edition will feature a stunning newly restored high-definition digital transfer of the unrated version of Videodrome, approved by both Cronenberg and cinematographer Mark Irwin.

·An illustrated 100-page hardback book featuring new writing including Justin Humphreys on Videodrome in a modern context, Brad Stevens on the alternate versions, Caelum Vatnsdal on Cronenberg’s early works, extracts from Cronenberg on Cronenberg featuring Cronenberg’s reminiscences of getting started in filmmaking and shooting all the films in this collection, plus more, illustrated with original archive stills

Pre-order the UK BD/DVD set from Amazon.co.uk
Posted by Dark Angel at 20:11