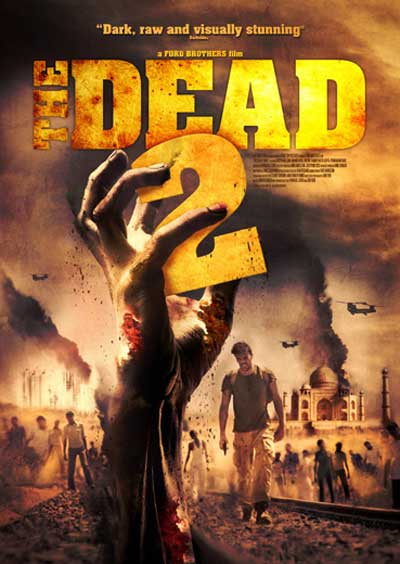 The Ford Brothers sequel to their 2010 zombie smash "The Dead 2 : India" is out now on UK DVD and were nice enough to tell us a bit more about it.
How does THE DEAD 2: INDIA differentiate from THE DEAD?

Howard- Just being in India with it's beautiful but vast landscapes, bustling cities and of course visually fascinating slums, we hope gives the film a whole different feel to begin with.  We were also attracted by their deep religious beliefs and a whole new culture which would translate "the dead coming back to life and attacking the living" in a very different way to the African perspective.  We also really wanted to ratchet the action and pace up too and give people a new journey that means they don't have to have seen part 1 to pick up The Dead 2. We needed to stand on it's own but maintain elements that we felt drew people to 'The Dead' in the first place.. 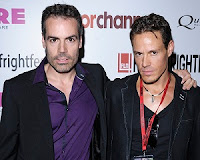 Jon - I guess the Dead films are essentially survival horror, set in exotic lands. We wanted keep to the theme of the original but with a whole new story, characters, pace, setting and philosophy..  It was funny, the cast and crew couldn't believe how ambitious the script was! I think no one thought we were going to be able to pull off an epic film on a tiny budget. And believe me, this film was incredibly difficult and dangerous to make. I understand why there is no one else on the planet doing this type of extreme filmaking. We seriously risked our health and our lives to make it. We really hope the viewers appreciate just how tough it really was to make a film like this! I honestly don't think we should ever attempt anything like this again.
Was a ‘THE DEAD’ sequel always part of the plan?
Howard -  “Jon and I felt we’d get around to making a sequel one day as there was plenty of scope to take the theme of abject horror and emotional devastation presented against a stunning natural backdrop. But it was while we were escorting The Dead to various fantasy festivals around the world, and reading many of the Internet comments and feedback, that we felt compelled to make another film pretty quickly to satisfy the demand that was there”.

Jon - “Although making The Dead was a total nightmare in terms of locations, logistics, and outright danger. We still felt our creative itches hadn't been fully scratched and the fact that no one else was filming in these far flung, dangerous places. There just seemed to be too much talk and anticipation about us making another zombie movie we couldn't ignore. So we thought let’s do it, and let’s see if we can really do something special for the viewers.
What makes your zombie-action film distinctive against other current titles?
Jon - Other than the most obvious differences being the locations, most zombie movies seem to have drifted off from what myself and many other fans of the original classics liked the most. We felt we wanted to stay true to the zombie rules of old, inspired by the seminal work of George A Romero and Lucio Fulci’s versions.

Most of the current zombies films are trying to innovate (fast, jumping, humping, kissing, friendly zombies, etc) ; even if our living dead are slightly faster this time out, ironically what hopefully keeps our films fresh is the fact that we are not trying to alter the genre. We are doing our best to further it while trying to maintaining the original rules that made this genre so enjoyable in the first place.”

How gruelling was the filming process?
Howard - “It took 30 intense and hectic days, shooting 17 hours a day with no safety net, no stuntmen, and a minimal crew. We had to cull half the crew and downsize to be less obtrusive.
Jon - “It’s no exaggeration to say we pushed ourselves to the absolute limits on THE DEAD 2: INDIA. To near death sometimes,  The roads out there are dangerous enough but we really went on a journey into the wilderness to try and give the audience something never seen before.  This presented other problems which included local gangs, which threatened us with violence and some of the female crew with rape. We were stoned by local villagers and even had dogs thrown at us on one occasion. It was a truly tough experience. Try being creative under those conditions!
What made you choose Joseph Millson for the lead?

Howard - We knew Joseph from way back, when we'd worked together in the mid 90s. We kept up to date on his growing body of impressive work and thought he’d be great for the lead in THE DEAD 2: INDIA. He stepped up to the mark for us and we’ll never forget it. He elevated our film and gave us something special. I hope it does something special for him in return because he has real star quality.

Anand Goyal was another real find. He plays Javed, the street urchin Nicholas befriends on his way to Mumbai. Anand along with the rest of us worked day and night in very harsh conditions. He’s definitely a star of the future and one to watch. We were so lucky with our cast and I am incredibly grateful for their hard work and amazing support. They got behind THE DEAD 2: INDIA in a way I could never have imagined.

What was the casting process like for THE DEAD 2: INDIA?
Howard - We went to an acting school in India which has produced a number of Bollywood stars including Shahrukh Khan, Manoj Bajpai, Samir Soni and Shiney Ahuja. Danny Boyle discovered Freida Pinto there for Slumdog Millionaire. So if it was good enough for Danny, it was certainly good enough for us! We chose Meenu to play Ishani Sharma because, out of all the girls we saw, many of whom were very talented indeed, she had a very natural quality, unassuming and a very indigenous look, at least in our eyes. The other girls also read brilliantly but they felt more like city girls, whereas Ishani had to be from a humble home and Meenu nailed that perfectly.”
Is the final cut of the film how you envisioned it to be?
Howard - “THE DEAD 2: INDIA is definitely a quintessential Ford Brothers movie in every respect. Jon and I swapped duties when needed. We're flattered when reviews state "we obviously had a bigger budget than the first film" which unfortunately isn't true. We just worked our asses off to try and get what we wanted..”
Jon - The bottom line is, we made this film against the odds. They told us we’d never be able to make a film like this in India. Tick. That we would never be able to film in the middle of a bustling city where millionaire mansions stood next to slums. Tick. That we would never manage to paraglide off a roof away from hordes of zombies. Tick. That we would never be allowed to ride a motorbike through the slums shooting the dead. Tick. That we would never get the army to cooperate or get guns and military vehicles for the battle scenes. Tick. That we’d be banned from filming in ancient temples. Tick. That we could not get hundreds of extras for our major sequences.. Tick. I couldn't be more proud of what the whole cast and crew have accomplished on THE DEAD 2 : INDIA. “

THE DEAD 2 is available on UK DVD now. Released by Altitude Film Entertainment.