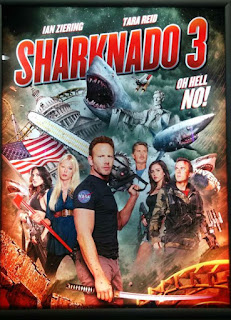 Good news for all you fans of the "Sharknado" films, the  *cough* eagerly anticipated third film "Sharknado 3 :Oh Hell No" will be getting its UK premiere this coming Thursday, 23rd July on the UK Sy-Fy channel, the day after it's US premiere.
This co-production between the Sy-Fy channel and Asylum pictures was filmed by returning director, Anthony C. Ferrante, and follows in the wake of last summer's "Sharknado 2: The Second One", which became the most-watched original movie in the channel's history. This time, the swirling shark scenario takes a bite out of Washington DC before turning its terrifying teeth on the Eastern Seaboard en route to sunny Florida.
On the kooky new title, producer David Michael Latt of The Asylum gives credit where it's due: "The sharks and tornadoes get all the glory," he said.  "But we would like to thank our long-time marketing guru Mike DiGrazia who first suggested 'Oh hell no!' A dedicated fan of the genre, Mike created the tag lines for 1 and 2 -- 'Enough Said!' and 'Shark Happens' -- as well as the Sharknado posters, including the original, which was a viral sensation on its own."
Sharknado 3 stars Ian Zierring as Fin, Tara Reid as April and Cassie Scerbo as Nova, with appearances by David Hasselhoff as Fin's father, Bo Derek as April's mother and cameos by Mark Cuban as the president and Ann Coulter as the vice president.