"The Editor" gets US BD/DVD release 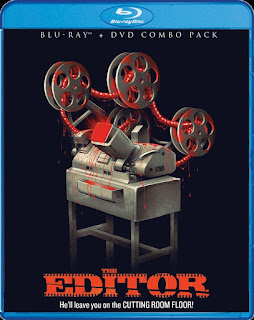 Italian Giallo spoof “The Editor”, from cult production company Astron-6, looks set to be getting a release on BD and DVD in the US courtesy of Shout factory.
Rey Ciso (Adam Brooks) was once the greatest editor the world had ever seen. Since a horrific accident left him with four wooden fingers on his right hand, he’s had to resort to cutting pulp films and trash pictures. When the lead actors from the film he’s been editing turn up murdered at the studio, Rey is fingered as the number one suspect. The bodies continue to pile up in this absurdist giallo-thriller as Rey struggles to prove his innocence and learn the sinister truth lurking behind the scenes.
Part homage and part parody and featuring tracks from noted genre composer Claudio Simonetti and featuring the legendary Udo Kier, this one is a must for fans of Argento and Bava.
This one played at the Mayhem film festival in 2004 and went down an absolute storm, you can read my review of it HERE
The film is released in a BD/DVD combo pack, which contain the following special features...

The film is released to US disc Sept 8th.

Pre-order the US BD/DVD from Amazon.com