"Riki-Oh: The Story Of Ricky" UNCUT on UK BD 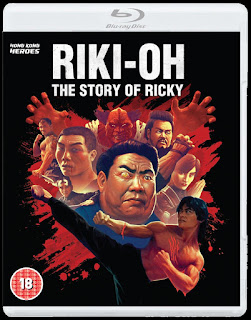 Not strictly horror, but one that should appeal to fans of the genre, being easily one of the most amazingly violent and gory movies ever to emerge from Hong Kong (or anywhere else for that matter!) - "Riki-Oh: The Story Of Ricky" comes to UK DVD and Blu-ray 27th July.
Set in an alternative universe in the year 2001. After killing the drug dealer responsible for his girlfriend’s death, Ricky (Fan Siu-Wong) finds himself banged up in a prison ruled by a corrupt warden and a group of super-mercenaries known as the Gang of Four.
Trained in an especially deadly form of martial arts, and possessing super-human strength making him virtually indestructible, Ricky responds to the bullying of various inmates, prison guards and the Gang of Four in the only way he knows how…
Cue disembowelment, decapitation, dismemberment, flaying, manual organ removal, exploding bodies, crushed heads, exposed brains, popping eyeballs, human mincing (and we’re not talking about adopting dandyish affectations here!), one jaw-dropping mother of a monster and the goriest climax you will ever see!
Banned in many countries around the world, "Riki-Oh: The Story Of Ricky" is 88 minutes of the purest, unadulterated, blood-soaked fun ever to be passed by the BBFC. A radical fusion of brutal martial artistry, extreme violence and dark visuals, this masterpiece features some of the most outrageously graphic and convincing ‘splatter’ effects in the history of cinema.
This is one film that really does have to be seen to be believed. Gore-hounds who indulge in the dubious pleasures of The Texas Chainsaw Massacre and Ichi the Killer will be in Seventh Heaven!