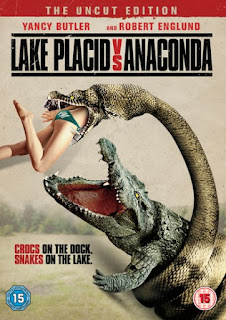 The killer crocs from "Lake Placid" and giant snakes from "Anaconda" clash in the all-new creature feature "LAKE PLACID VS. ANACONDA", debuting on Digital HD on August 24 and DVD on September 7 from Sony Pictures Home Entertainment.
Anacondas large enough to crush an SUV. Crocodiles strong enough to leap onto speedboats. When they’re not hunting for human prey, they’re more than willing to take on each other. Get ready for a non-stop bloodbath unlike anything you’ve seen before in this heart-pounding battle between mutated crocodiles and genetically engineered anacondas.
When an experiment to cross-breed giant crocodiles and giant Anacondas goes horribly wrong, a small town sheriff must find a way to destroy the two monsters before they kill the whole town.  The fifth film in the series for both franchises, "LAKE PLACID VS. ANACONDA" stars Yancy Butler (Kick-Ass franchise), Corin Nemec (“Stargate SG-1”) and horror icon Robert Englund (A Nightmare on Elm Street).

Packed with hot sorority girls, big guns, and jaws massive enough to swallow a human in one bite, this is one screaming good time!


The film has a run time of approximately 88 mins and is rated 15.
Follow "LAKE PLACID VS. ANACONDA" on Facebook
Pre-order the UK DVD from Amazon.co.uk